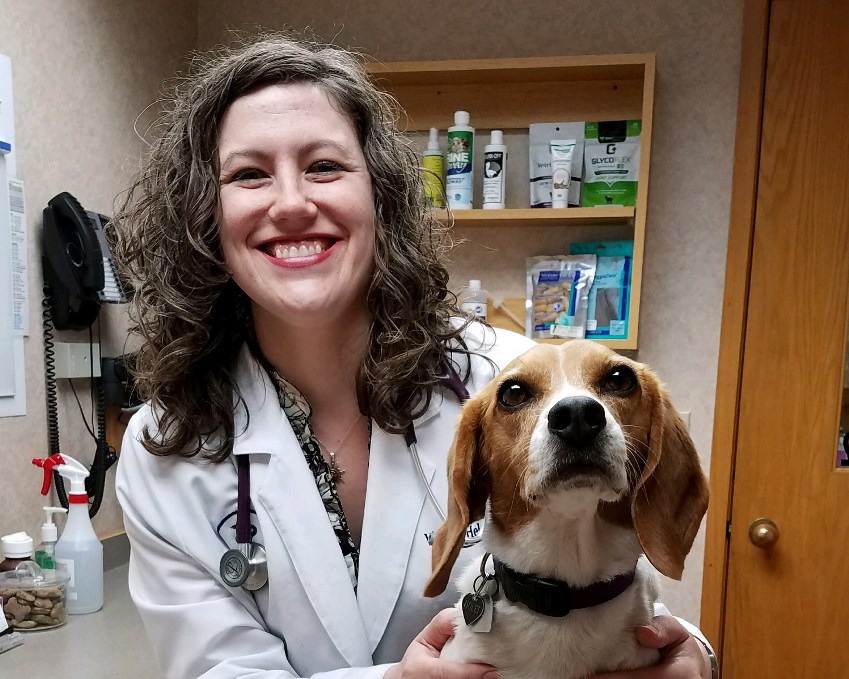 If you want to understand why Dr. Victoria Hekman got into the field of veterinary medicine, you needn’t look much further than the case of Petunia the pig.

“Petunia was a market hog that lived inside the house with a family that owned a farm,” says Victoria, who joined the staff of Cascade Hospital for Animals as an Associate Veterinarian last month after a stint in an emergency room of an Akron, Ohio pet clinic. “She even had her own bedroom.

“They brought her in in the middle of the night in a dog crate after she experienced some serious problems with her rectum. She was about 8 years old -- which is pretty old for that type of pig -- so we wanted to treat the old gal with tender care.”

Victoria says she was able to nurse Petunia back to health and “preserve the bond between her and her owners” -- the main reason that attracted her to the practice of veterinary medicine for small animals. She relishes the fact that at her new position at Cascade Hospital, she has the opportunity to forge longer lasting relationships with owners and their pets that normally doesn’t occur in an emergency room situation.

“Now I have a chance to see the pets when they are healthy as well, which is the best way to get to know both their human owners and the animals themselves.”

A graduate of Catholic Central High School, Victoria owned a Pony of the Americas named Crocket as she was growing up, and at one point, she considered large animal veterinary medicine. But she was lured by the challenges and variety of small animal medicine and its disciplines of oncology, emergency medicine, cardiology and internal medicine.

An avowed dog lover, Victoria owns a 4-year-old pit bull named Edison -- or “Eddy for short -- he’s not the brightest bulb, but I love him anyway.” She likes cats as well and has some experience in dealing with exotics such as iguanas from her internship at the Metropolitan Veterinary Hospital in Akron.

With the extensive line of services offered by Cascade Hospital for a wide variety of pet species, it’s a sure thing that Victoria will find the sort of challenges in veterinary medicine that she is seeking.