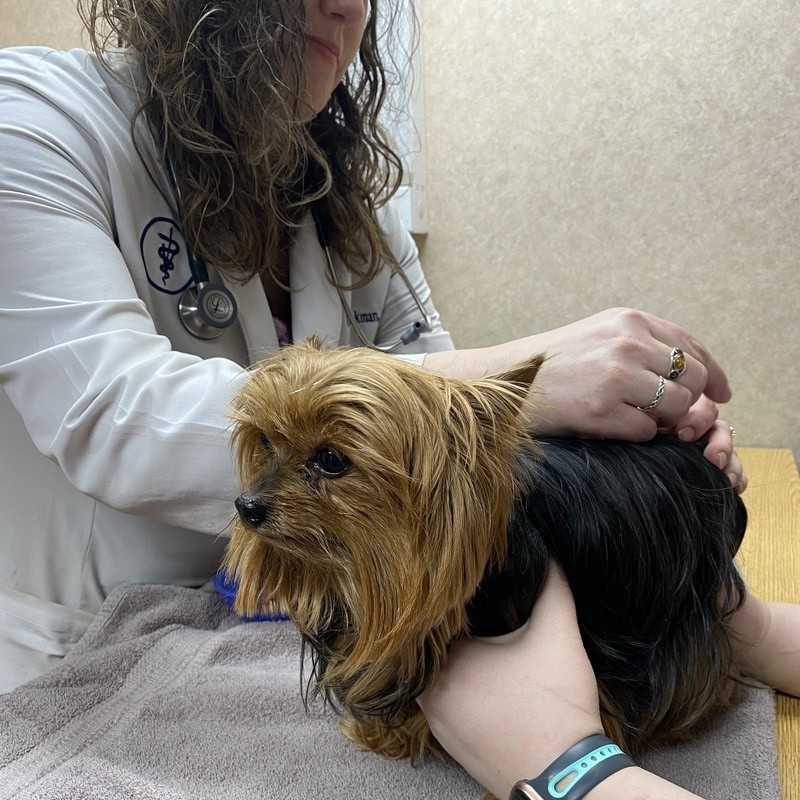 Cascade Hospital for Animals has been offering veterinary acupuncture therapy since 2019 and it has been a great success. In conjunction with traditional treatment or on its own, acupuncture can provide relief for issues ranging from pain to nausea to allergies. 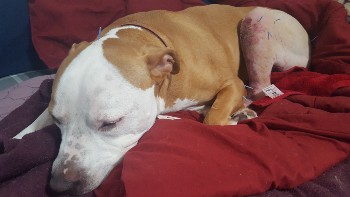 Eddie rests comfortably during his acupuncture treatment after surgery.Dr. Victoria Hekman helped launch acupuncture as an offering at CHFA and provides the treatment. She developed an interest in acupuncture, perhaps the most well-known of a group of therapies called Traditional Chinese Veterinary Medicine (TVCM), in veterinary school during an externship as well as while working with a veterinary oncologist who practiced acupuncture. From the start of her career, she had a long-term goal of incorporating acupuncture into the range of therapies she offered. In fact, part of the reason she chose to work for CHFA was its leadership’s openness to her pursuing acupuncture training.

Dr. Hekman completed an intensive six-month program through the Chi Institute in Ocala, Fla., that included lectures, testing, and labs, in addition to internship hours with a certified acupuncturist. Among the first patients she treated was her own beloved pitbull Eddie, who underwent surgery for a ruptured ACL and left knee. “Before and after surgery I used acupuncture to help with the pain and the inflammation,” she said, “and he responded pretty well to it. We still did surgery on him because he's a young dog and he really needed the functionality, but I feel that it helped him quite a bit with returning to function and during physical therapy.”

Acupuncture involves the placement of tiny needles in certain points of the pet’s body to stimulate nerves or regulate blood flow or inflammatory mediators. The placement points are usually a convergence of either blood vessels or nerves, making them something like networks in the body. “By placing a needle in one point,” said Dr. Hekman, “not only could you calm the nerves in a local area, but if you’re looking to treat nausea or inflammation, you could also affect change further away from the where the actual point itself is.”

It is helpful for young and generally healthy dogs like Eddie, but also with dogs suffering from long-term health issues. “Acupuncture is really helpful in the management of pain, particularly inflammation, any immune-mediated condition,” said Dr. Hekman. “We see a lot of allergy dogs. And it can also help with managing nausea, which is associated with a lot of our long-term patients with chronic conditions or who are undergoing chemotherapy. It stimulates their appetites and keeps them eating. It can even be used to stimulate the immune system so they can tolerate their chemotherapy and maintain their bone marrow function while they’re on it.”

According to Dr. Hekman, acupuncture broadens the opportunities for patients. “I have plenty of patients for whom Western medicine was doing a good job, but I felt that we could do more and we could really have a more positive 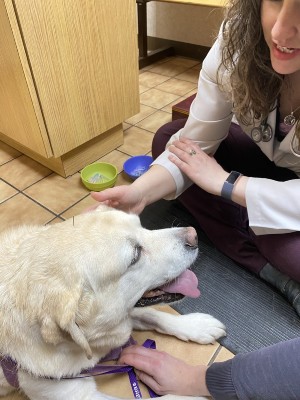 Zoe lies calmly for her acupuncture treatment with Dr. Hekman.impact and improve their quality of life a lot more if we added in this modality. And there are some patients who cannot tolerate traditional Western treatments for whatever reason, and for them, acupuncture is a great alternative.”

Dr. Hekman begins treatment by placing needles in certain “permission points” in the body, or less sensitive places to give the pet a feeling of calm and trust. “Those are points either on the head or in the back that are not typically painful areas.” Sometimes pets relax and lie down naturally during treatment, while others need a little extra coaxing in the form of peanut butter in order to stay still.

Unlike many humans, says Dr. Hekman, pets generally don’t mind having needles placed in their skin. “The only time I really see a reaction is if I'm in an area that can be a little painful,” she said. “And there are points that are typically going to be a little bit more uncomfortable just because those points have a high concentration of nerves in that area. But for the most part, most animals will tolerate quite a bit in the way of the needles.”

Many humans have a fear of needles that they can’t help projecting onto their pets, which might make them leary of acupuncture at first. Dr. Hekman understands that. Her own brother asked her to give his dog acupuncture treatment but at first couldn’t bring himself to be present for it. “He is quite squeamish and he cannot stand needles,” she said. “But when he came over and saw how small the needles were and that his dog was fine, he was much more comfortable. However, he still can’t really look at the needles!”