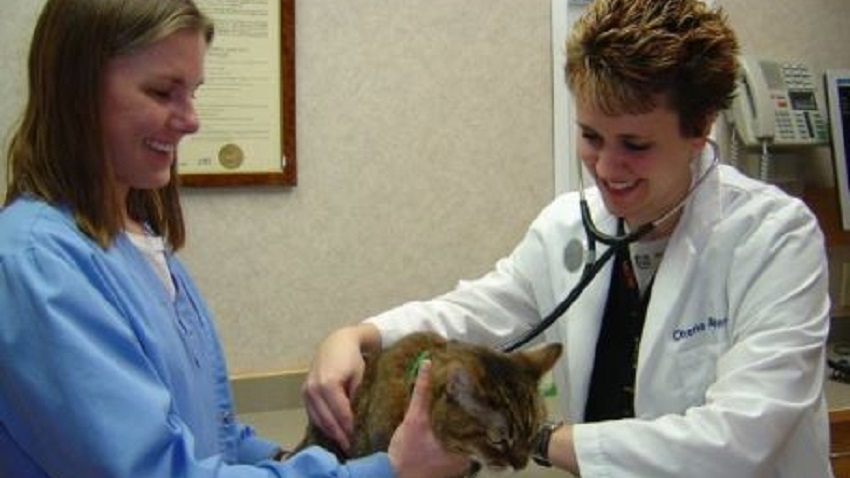 Most people have heard the phrase “curiosity killed the cat,” but they don’t know there’s a second half to that old saying that goes “but satisfaction brought it back.”

If that could be applied to humans, it may fit our own Dr. Cherie Anderson, veterinarian at Cascade Hospital for Animals who loves the dare that felines throw down every day to find out what’s wrong with them.

“I love cats in general, but I particularly love the challenge of practicing internal medicine with them,” Cherie says. “They never follow the rules, and cats instinctively hide illness as long as they can. That can work against them because a cat can become quite ill by the time the owner recognizes the problem. Unfortunately, that tendency to mask illness may allow diseases to progress so far that there is minimal help we can give.”

Cherie comes by her affection and her experience honestly as she owns four cats of her own, part of the Anderson menagerie that includes a pit bull, miniature poodle and Arabian-Pinto gelding that goes by the name of Tango after Twilight.

Two of her cats, Leo and Ollie Toots, are 10-year-old littermates that she adopted from friend's barn when she graduated from the Michigan State University veterinary school in 2007. Her flame point Siamese mix aptly named Fiyero “is the naughtiest cat I have ever owned,’ Cherie says. Her Tonkinese cat Fitzy loves to play and get into mischief like getting his head stuck in Kleenex boxes.

It was Fiyero that needed surgery when he ingested a piece of rubber and fell ill. He was treated in time, but it was a personal reminder to Cherie that cat owners in particular must be observant and vigilant when it comes to their pets’ health.

“Cats can be difficult to get into carriers, and they may get distressed in the car and at the clinic,” she says. “But we strongly recommend that cats undergo annual feline wellness exams because those exams can identify illness that can be successfully treated in their early stages. We have a superb support team here that utilizes calming handling techniques with our feline patients to make a visit as low stress as possible.

“The earlier the intervention, the better chance we have of prolonging the cat's quality of life and time with its family.”