Are Dogs Safe if They Play in a Garden? 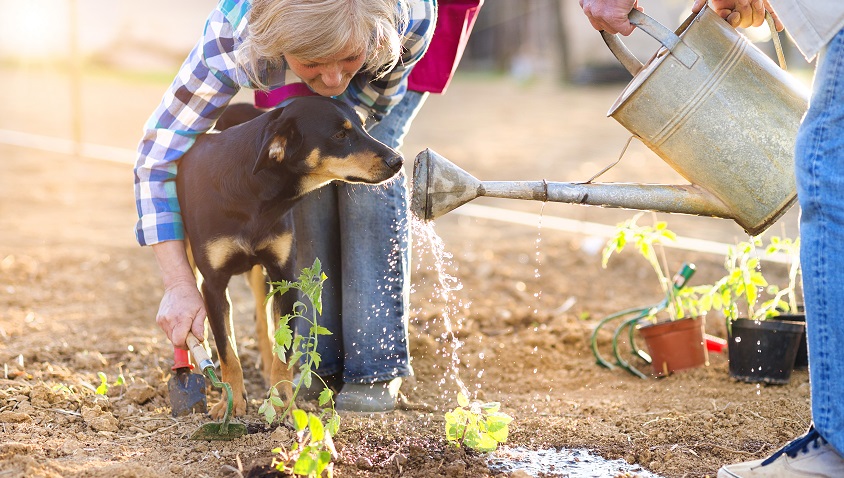 Dog owners who also are gardeners have been asking us at Cascade Hospital for Animals whether it’s safe to take their pets out with them as they perform various chores such as weeding and fertilizing. The short answer is yes, but be prepared to supervise your pet as you tend to your garden.

Dr. Steven McBride reminds dog owners that their pets are curious animals that may get into mischief in ways you normally wouldn’t imagine -- such as eating clumps of weeds or organic fertilizers.

In general, eating clumps of grass or weeds that may have insects is not a threat. Chemicals applied to the grass or weeds, or ingestion of an excessive amount of grass and dirt can be a problem. The former can be dangerous, depending on the chemical; the latter is more of a mechanical irritant to the gastrointestinal system. There are some insects that secrete irritating substances that might cause a dog to salivate excessively or even vomit, but it is not likely to be dangerous.

If you apply fertilizers and pesticides, refer to the instructions on the package to determine when it is safe for your pet to roam the area again. Fertilizers made with organic ingredients such as fish emulsion, bone meal, and blood meal may attract your dog as food, unlike synthetic granular fertilizers. Avoid using slug baits in areas where a dog may find and eat them.

Also, be aware that dogs may become ill if they ingest a large quantity of cocoa bean mulch. According to the American Veterinary Medical Association, pet owners should “avoid use of cocoa bean shell mulch in landscaping accessible to unsupervised dogs, or at least use it cautiously around dogs with indiscriminate eating habits. The odds of dogs dying from eating the fresh mulch are low, but those suspected of ingesting it should be examined by a veterinarian.” See here.

While it’s possible your dog may become sick by eating something, the most common challenges with having a pet as a gardening partner are digging holes, damaging plants and eating vegetables that you hoped would be served at your table.

But if you think your dog is suffering gastrointestinal upset or other illness after a stint in the garden because it ate something poisonous, call us or the poison control hotline of the American Society for the Prevention of Cruelty to Animals (ASPCA) at (888) 426-4435. There may be a consultation fee for use of the ASPCA hotline.