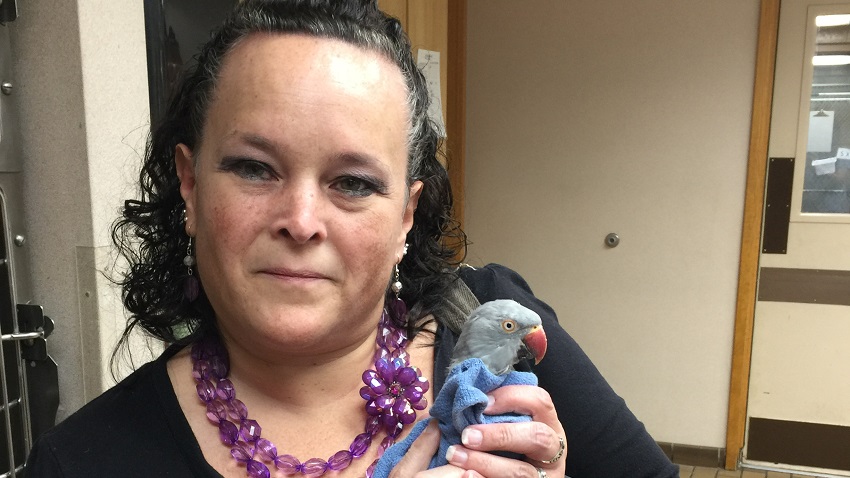 When her Indian Ringneck Parakeet flew from her shoulder in May after being startled by a gust of wind, owner Kathryn Johnson thought she would never see her beloved bird again.

But thanks to a fortunate turn of events and good detective work by Cascade Hospital For Animals, Johnson was reunited nearly 2 months later with Peppin, who had managed to fly from Holland to roost at a home on the Thornapple River near Cascade Township.

“A lot of things fell into place for us to reunite Kathryn and Peppin,” said licensed veterinary technician Mandi Cherpes, who works with exotic pets at the hospital and found the posting from Johnson about the parakeet on the For the Love of Louie Facebook page.

“When I first contacted her, Kathryn was reluctant to believe that Peppin had managed to stay alive all that time in the wild,” Cherpes said. “But Peppin was in pretty good shape, probably a combination of feeding on bugs, berries and seed at someone’s bird feeder.”

Peppin had been found by a dog and cat owner who is a regular client of Cascade Hospital For Animals and knew of its expertise with exotic pets. The parakeet was quite friendly and perched itself on the client’s shoulder long enough to be gently grasped and placed in a box for transport to the hospital.

Indian Ringneck Parakeets, about the size of a conure, are a fairly unusual bird species for Michigan, so Cherpes set about trying to find its owner using the For the Love of Louie site, a Facebook page dedicated to connecting Michigan owners with their lost pets. After scanning for references to Indian Ringneck birds, Cherpes discovered Johnson’s post in May and contacted her.

Already a client of Cascade Hospital, Johnson recently had brought in another Indian Ringneck parakeet for a routine checkup -- the replacement bird for Peppin. “Kathryn was speechless when she came in to bring Peppin home,” Cherpes said. “She was so glad to have him back, and the two birds will be fine once they are slowly introduced to each other.”

Things fell into place to reunite Peppin with her owner, Cherpes said, but owners of dogs, cats and exotic birds should ensure that their pets have permanent and traceable identification by using microchips implanted underneath their skin (dogs and cats) or in breast muscle (birds)

Veterinarian offices and animal shelters have a standard protocol of checking whether a lost animal brought to them has an implanted microchip. The microchip acts in a similar way to an RFID chip found in retail stores and warehouses. When activated and read, the chip gives a serial number that a veterinarian’s office or animal shelter can then match up on the internet to locate the pet’s owners. A microchip does not act as a GPS beacon so a pet can be traced directionally, Cherpes said.

For birds, the microchip is placed in the pectoral (chest) muscle so it will not migrate and this procedure is performed under a short general anesthetic. The chip is then registered by the owner on the national pet owners directory. However, the hospital requires that any pet brought in for microchip implant first undergo a general exam to assess overall health before implantation.