40 years into a successful career, Dr. Siegle looks forward to the next chapter 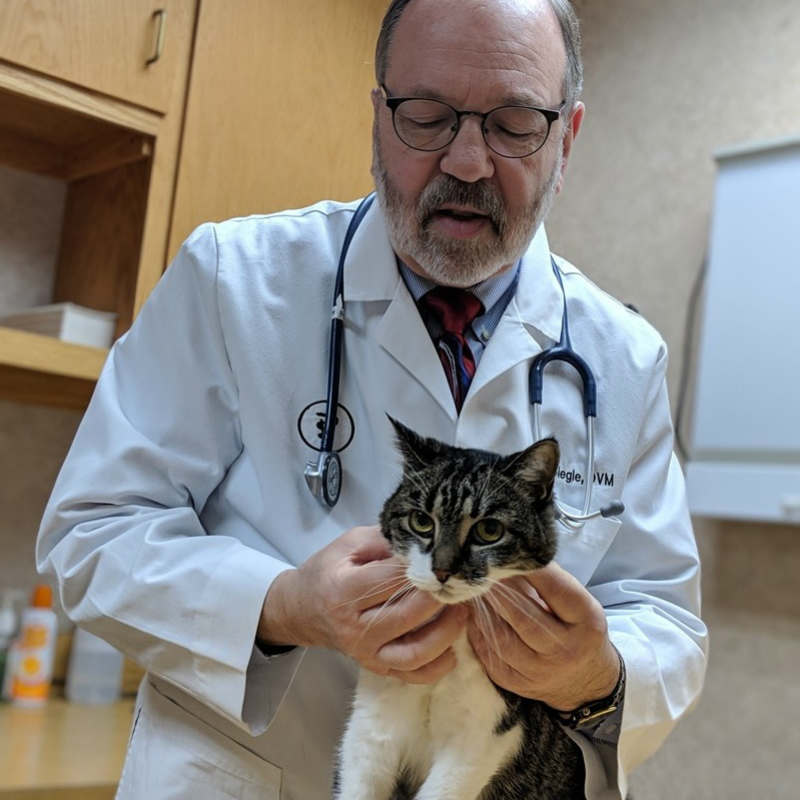 Looking back on more than 40 years as a veterinarian, Dr. Richard Siegle has seen a lot of change. Since he joined the practice in 1978, Cascade Hospital for Animals has grown from a small family veterinary practice to two clinics with 92 full- and part-time employees, and boarding, daycare, grooming, and training services. And now, with the Breton Village Animal Clinic relocating to a bigger facility soon and his son in his last year of veterinary school, Dr. Siegle has much to look forward to as well. 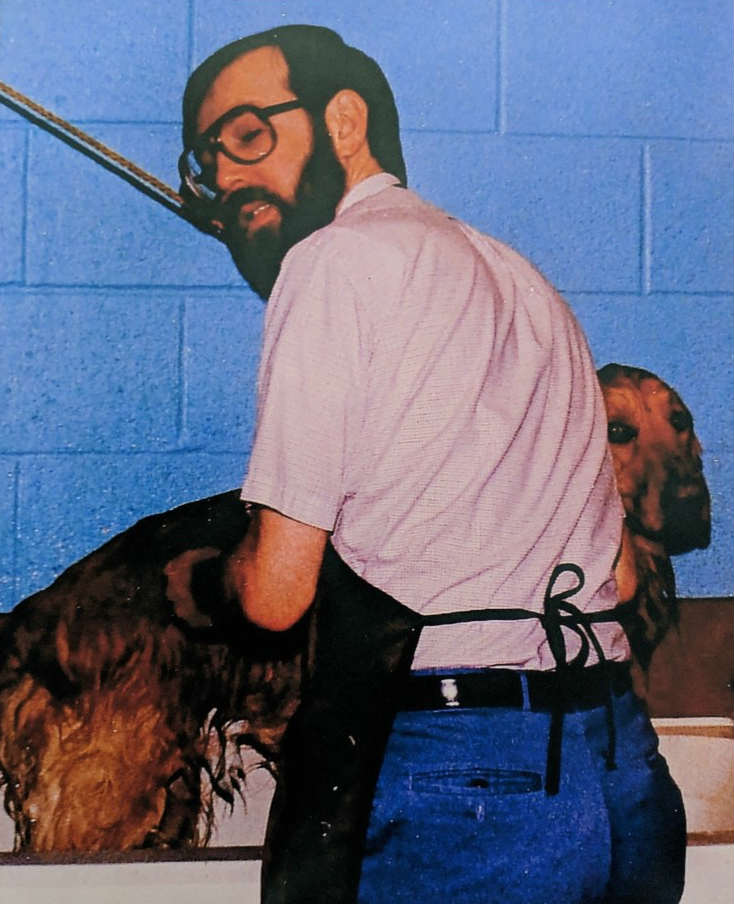 Dr. Siegle’s father, Dr. Richard D. Siegle, was a large-animal veterinarian who began practicing in the Alto area in 1939 and who first opened the Cascade Hospital for Animals in a farmhouse next to the current location in 1955. At that time, Dr. Siegle’s parents and one other person were the clinic’s only employees; his mother was the receptionist. In the fifties and sixties, the younger Dr. Siegle often went with his dad on farm calls, and later, as a teenager, he cleaned runs and assisted in treating the pets. “I always wanted to be my own boss, and I enjoyed animals immensely, so it was really a natural choice to become a veterinarian with my own practice.”

In 1978, after graduating from veterinary school, the younger Dr. Siegle began practicing at the Cascade Hospital for Animals alongside his father. “My dad was 63 at the time, so you could say as I was walking in the front door, he was somewhat walking through the back door,” he said. “We practiced together for five years and then the rest is history. In 1983, I built the existing building and it’s been added on to four times since then.”

Much of this growth came about out of necessity as the Cascade area exploded in population in the 1960s and ‘70s, according to Dr. Siegle. “When my father started practicing, this was country. I can remember a turkey farm was around the corner. 28th Street was a two-lane road. Then in the late sixties, people started moving out from Grand Rapids to this area and it’s just grown ever since.” 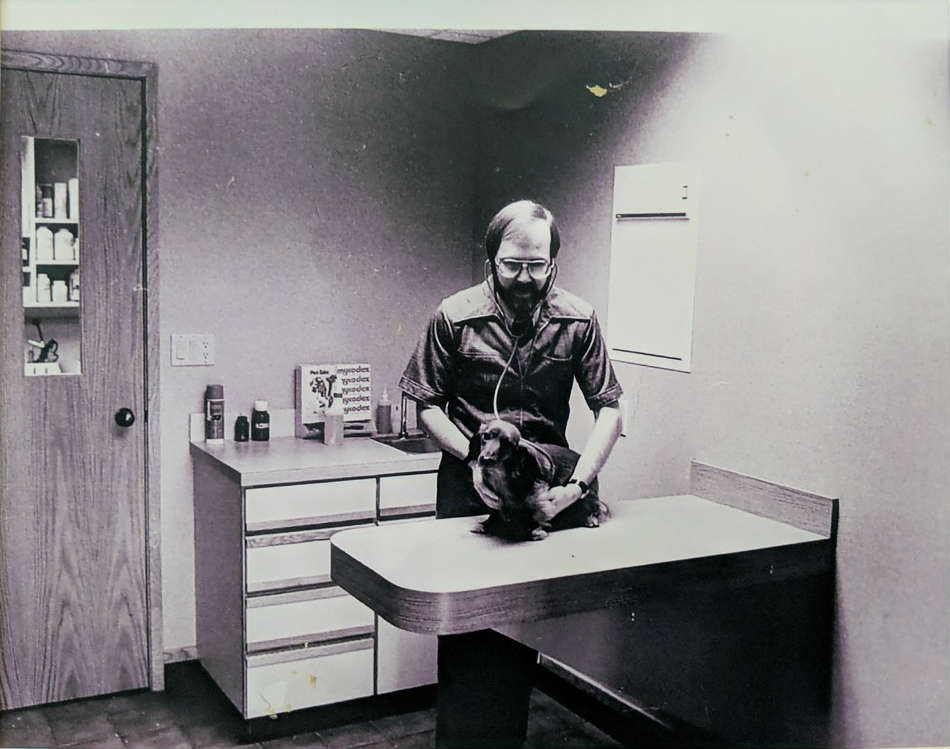 Dr. Siegle says serving the community has been one of the highlights of his career. One story from his early years stands out to him: “I recently had graduated and I responded to an emergency call from a new client at two in the morning. The wife brought in a very sick puppy with parvovirus that required intense treatment and a long hospital stay. She stated that this puppy was very special to her husband who was a police officer and who was in the hospital’s intensive care unit recovering from injuries sustained from being hit by a drunk driver while directing traffic. Their pet, Bogie, after weeks of hospitalization, was sent home to be reunited with his master. The letter I received from them, I still cherish today. It stated how much Bogie helped with his recovery and how appreciative they were of my services and acts of kindness and generosity. This case demonstrated to me the importance of the human-animal bond and how giving back can touch people’s lives."

This early lesson helped form Dr. Siegle’s approach to his practice. “I have a business to run and it needs to be financially solvent, but also at the same time I have always felt that in the equation the dollar sign is the last thing. You provide good service. You treat people well. You will earn a good living and I have been blessed in that regard. I’ve developed many friendships over the years. Many families have been coming over 30 years to our practice. Frequently we're dealing with the second to fourth generation coming to the practice.”

But Dr. Siegle knows he can’t take full credit for the important place the Cascade Hospital for Animals holds in the community. “It's because I've been blessed to have a very supportive wife and family along with many fine employees over the years that have shared common goals and expectations and they've made me look good,” he said. “I certainly have not been able to do this alone and I have two wonderful partners. We would not be what we are today without a team effort. I'm just a small piece of the puzzle.”

Later this year, the Breton Village Animal Clinic is moving across the street from its current location to a larger facility. “We will be moving next to Chow Hound and Fresh Thyme Market on Burton.” It’s part of a “managed growth” that Dr. Siegle sees continuing for the foreseeable future. And though he will continue to practice, he also has some other things he’d like to do with his life. “I’ve always said, ‘someday I’ll do this, someday I’ll do that.’ Well, at 65 years old, someday is here.” Easing any upcoming transition is the hope that the family legacy will continue into the next generation: Dr. Siegle’s son is in his last year of veterinary school and would eventually like to come back to the family practice.

Dr. Siegle hopes that no matter what the future brings, the advice he has imparted to the staff over the years will resonate. “When you’re in situations where you don’t know what to do, there’s one simple question you just ask yourself: ‘What is the right thing to do?’ And many times, if you ask that question, the answer is right in front of you.”