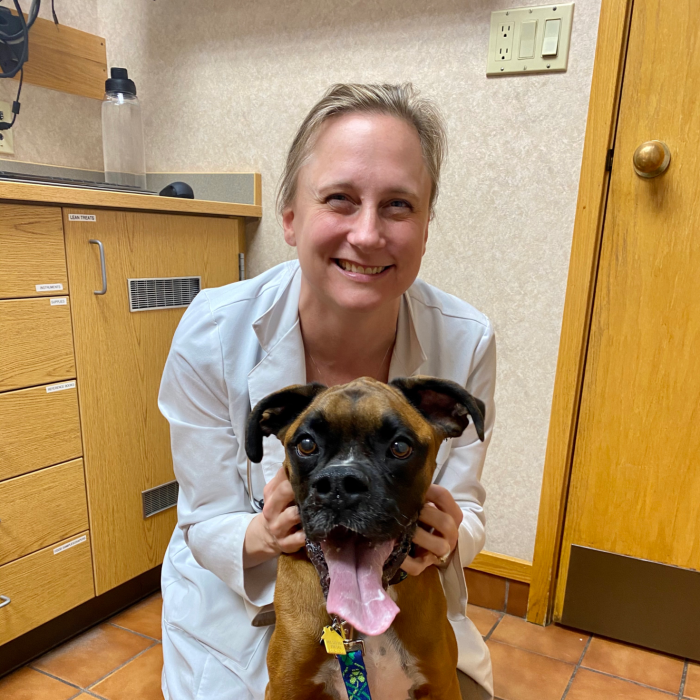 It all started in October with a little spot on his face. Vonnie’s owner Kellie, who has had the boxer since he was a puppy, noticed the spot on the side of his muzzle and though she watched it closely, at first she didn’t think it was anything more serious than an allergic reaction. 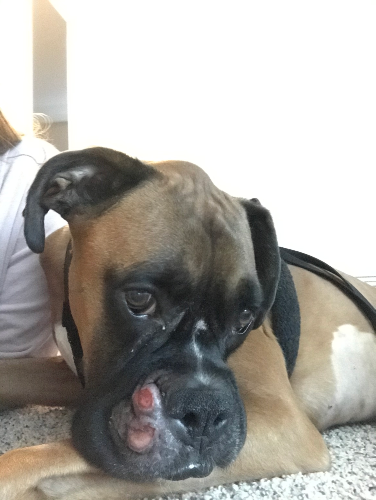 Vonnie's face lesions caused concern for his owner and vetAs time passed, however, the spot became worse, progressing over the course of a month from a tiny bump to a large, itching sore that Vonnie scratched at, causing it to bleed. At around the same time, Vonnie began to lose his appetite and started to become dangerously thin. Kellie theorized that there was a correlation between the sore on his face and his lack of appetite, thinking possibly his face hurt so much that eating was painful.

“He just didn’t want to eat,” said Kellie. “He was in rough shape. I could tell that he had no energy. He didn’t want to go on walks. He wouldn’t play. He just laid around.”

Kellie had only recently relocated to her home state of Michigan from Ohio when Vonnie’s troubles began. She first brought him to the original vet she had seen before moving to Ohio. The first vet believed the spot and appetite problems were caused by a bacterial infection, which he treated with antibiotics and steroids.

“The first week, it was working really well because the steroids were reducing the inflammation,” said Kellie. “But as soon as we cut those down, and 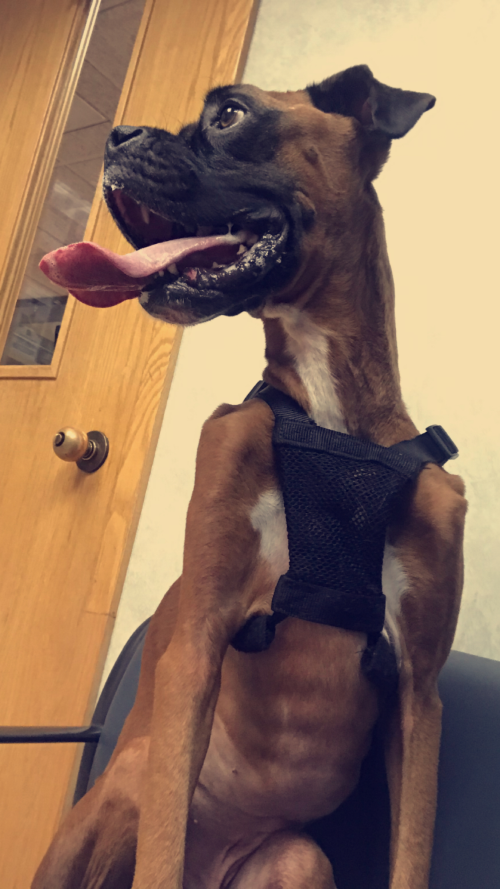 Vonnie was alarmingly thin at the height of his illness he just went to the antibiotics, it just came right back.”

At the recommendation of her friend Jillian, a Client Care Assistant at Cascade Hospital for Animals, Kellie brought Vonnie to CHFA for another opinion in late November. Right away, Dr. Laura Malik was concerned and began performing tests.

“When I saw Vonnie, he was very thin with these ulcerative swollen nodules on his muzzle,” she said. “He had some enlarged lymph nodes in the neck too.”

Dr. Malik performed a needle aspirate in which she drew cells from the swollen nodules and looked at them under a microscope. “It was alarming because the cells were atypical, the kind that could be cancer. But at that point, all we had were cells in a needle; we couldn’t be sure of what it was. All we did know was, it wasn’t the normal cells you would see if it had been just a skin infection or inflammatory reaction.” 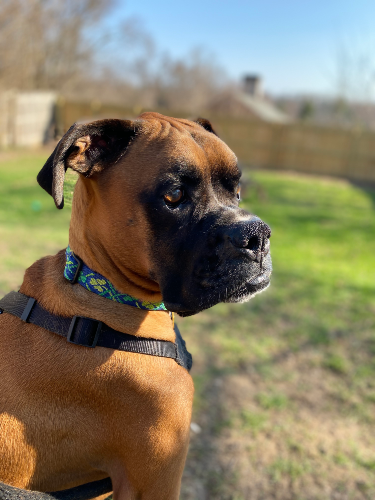 Now in remission, Vonnie enjoys being outsideIn an effort to rule out the possibility of cancer and find the cause of his issues, Vonnie had to undergo blood work, an ultrasound, and a full biopsy of the mass on his muzzle. To everyone’s great relief, the biopsy did not come back with a cancer diagnosis. The cause of the mass on his muzzle, as well as his loss of appetite and energy, was a rare autoimmune condition called pyogranuloma syndrome. As Dr. Malik explains it, “it’s a condition where the body starts attacking itself, thinking it’s foreign. And that’s pretty serious.”

Right away, Dr. Malik started Vonnie on three immunosuppressive medications in an effort to find the right balance that could control his condition. The results were somewhat encouraging to start, but Vonnie was still losing weight. In January, Dr. Malik added a fourth medication to his regimen, azathioprine; that combination of medications was the answer that finally led Vonnie to turn a corner. He began to slowly regain weight and the lesions on his muzzle began to improve. By the end of January, Vonnie was in remission, and continues to do well to this day. “We’re well within the safe long-term doses of medication, and he’s doing great,” said Dr. Malik.

Vonnie is now back to being himself, playful and active with a normal appetite. Kellie recalls that although the whole process was a time of stress 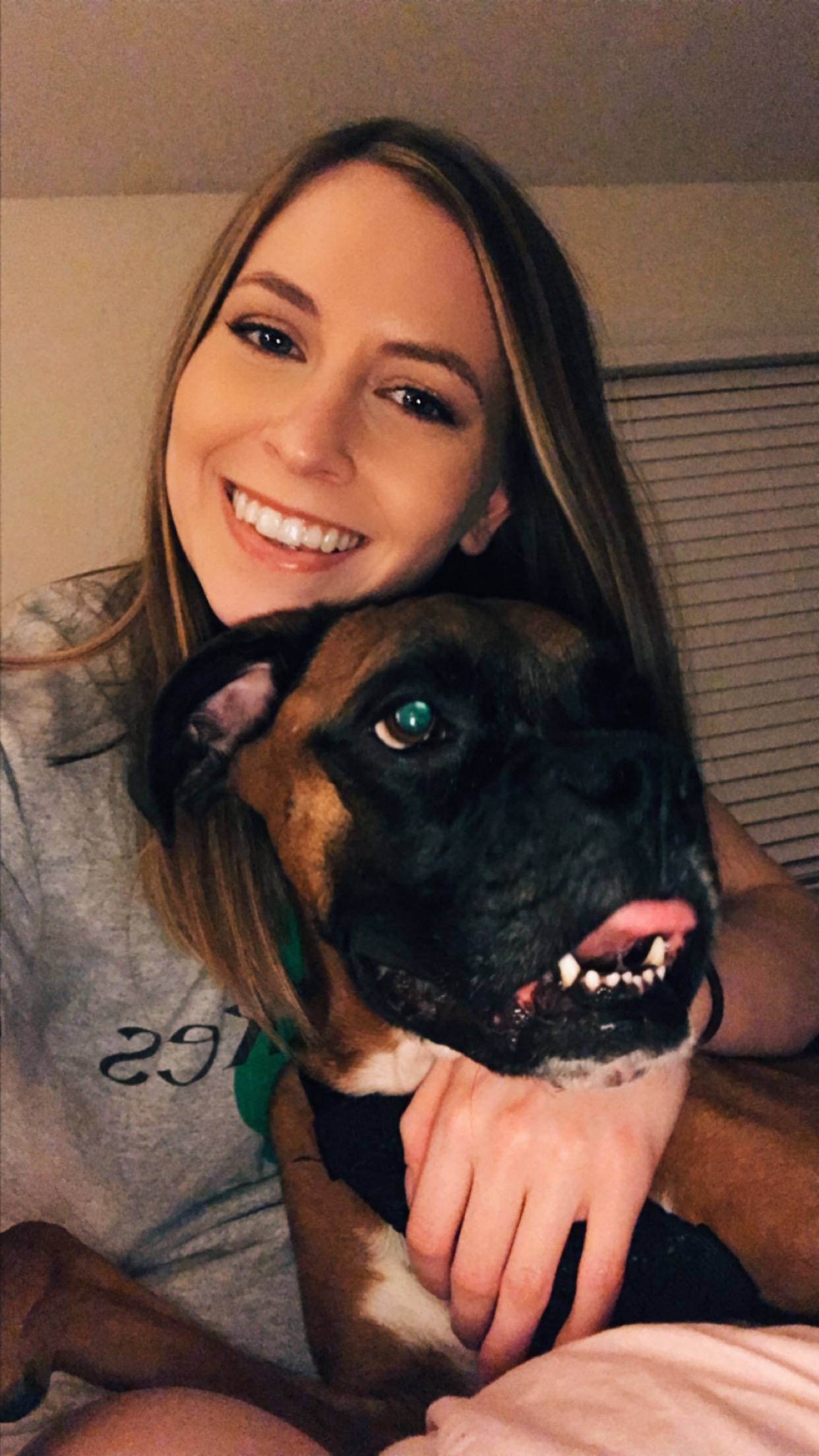 Vonnie and Kellieand uncertainty, she never doubted Vonnie was in good hands. “Dr. Malik has been great to work with, and she was always quick to call me back because she knew how scared I was. She stayed on top of it the whole way.”

Dr. Malik herself gives a share of the credit to Kellie for her determination in finding a solution for Vonnie. “She did a great job taking care of him and he is a very lucky dog to have her as an owner.”