What is “blocked cat” and why should cat owners watch for signs of it? 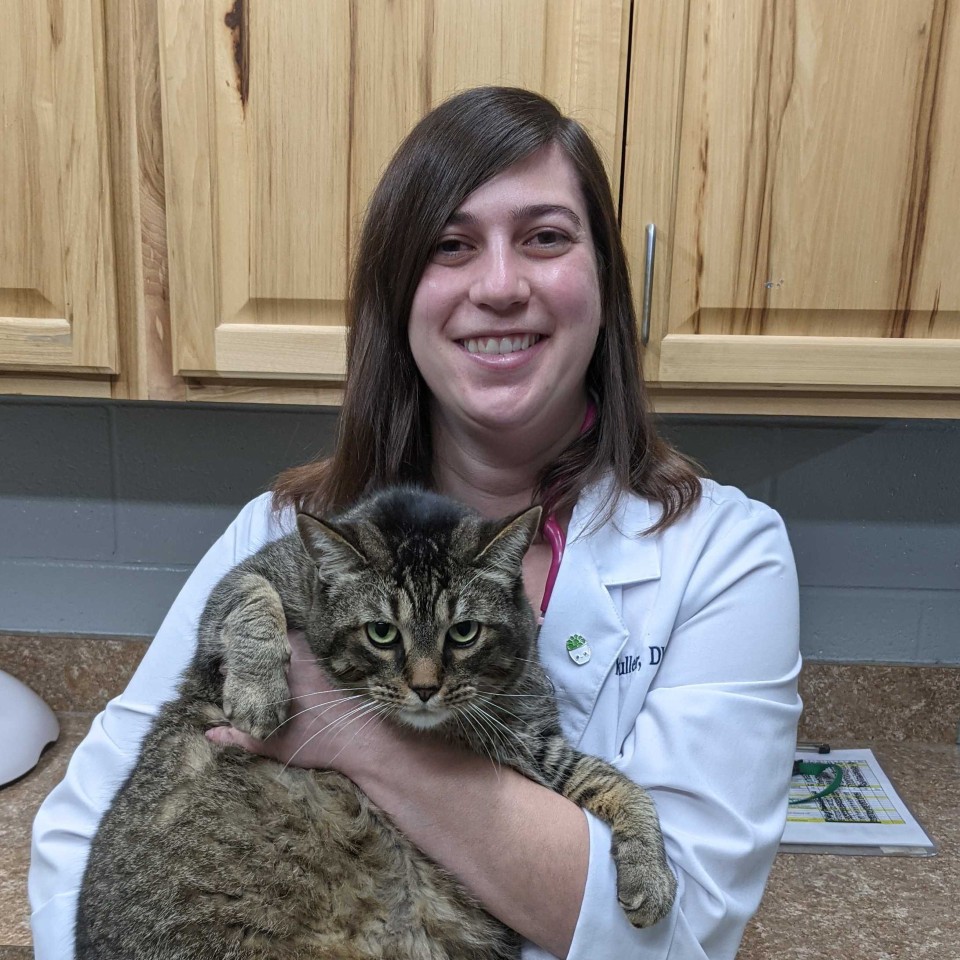 Cats can be mysterious creatures, and sometimes when they’re in pain they hide their suffering from their owners. That’s why it’s important, says Cascade Hospital for Animals’ Dr. Kyle Fuller, for cat owners to carefully watch their feline friends’ habits for signs of urinary blockage, sometimes known as “blocked cat,” a potentially fatal but treatable condition.

The source of the urinary blockage is obstruction in the urethra caused by the build-up of urinary crystals and what’s called a matrix plug, or inflammatory mucus cells from the lining of the bladder. This underlying condition is known as cystitis, and while it is not always clear why some cats develop the issue and others don’t, Dr. Fuller says there’s evidence that stress or anxiety can be the culprits. 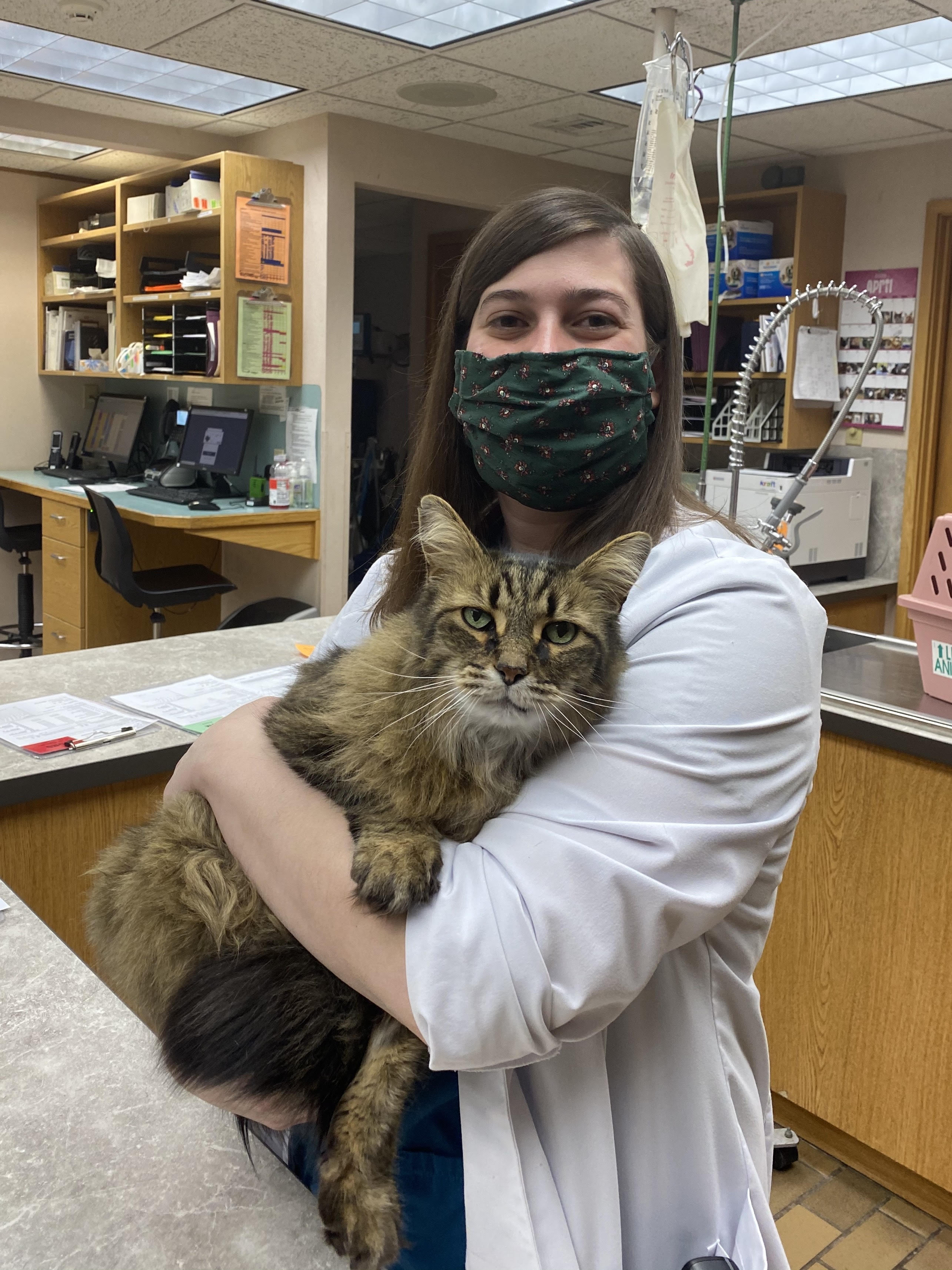 Dr. Fuller with a feline patient. CHFA and BVAC are cat-friendly practices that take steps to make trips to the vet as comfortable as possible for cats and owners.Additionally, cystitis is more likely to appear in young male indoor cats, due to their longer, narrower urethra. Indoor cats are also more likely to suffer from stress and anxiety, Dr. Fuller says, because they aren’t able to practice the hunting and stalking behaviors of their outdoor counterparts. Owners of cats in this higher risk group should be especially attuned to their cats’ litter box habits, she says.

“I tell people to look for straining in the litter box, which normally means that they're spending longer in there or vocalizing in the litter box, or crying out,” said Dr. Fuller. “Cystitis doesn't always progress to urethral obstruction. Sometimes people will notice blood in the urine, or the cat will seem to be in pain when they're urinating.” It’s when a cat is exhibiting symptoms like these, she adds, that seeking veterinary help is critical to prevent a urinary blockage. “If we can see them early, and if we can treat that condition with anti-inflammatory medications, medications that relax the urethra, and sometimes anti-anxiety medications, we can often prevent them from getting an obstruction or becoming blocked.”

Unfortunately, she says, “sometimes people may not pay very close attention to what the cat is doing in the litter box. And so sometimes cats will come in for vomiting or lethargy or feeling pain when their abdomen is touched, or sometimes even something as simple as a decreased appetite.” Such symptoms are evidence that the condition has elevated to urinary blockage and that the cat needs urgent veterinary care.

“When the urethra does become blocked, that is something that requires emergency care because the bladder will fill up with urine and they won't be able to void that urine. All of the toxic products that the kidneys are used to excreting in the urine build up in the blood and can cause severe metabolic abnormalities that can lead to heart arrhythmias or kidney failure. So getting these cats seen in a timely fashion is very important,” said Dr. Fuller, adding, “If it’s not treated, it could become fatal in 24-48 hours.”

The emergency treatment usually involves the placement of a catheter to dissolve the blockage with a flushing solution. Once the cat’s urine flow is restored, their kidneys go to work to begin the healing process.

More than an ounce of prevention

Regular visits to the vet and careful monitoring of the cat’s habits are two ways to stay ahead of urinary blockage. It’s also important to avoid scenarios that lead to cystitis in the first place. “One of the most important tools at our disposal is something called environmental enrichment, which means making sure that indoor cats can have mental stimulation and things that simulate the behavior that they would have in the wild – playing with toys or hiding toys throughout the house for them to hunt for,” said Dr. Fuller. “Put bird feeders outside of your window to give the cat something to watch outside. If you have multiple cats in your household, ensure each cat has a space that it can get away and have alone time, but also have time to interact and play with family members and other pets in the house.”

It’s also important to ensure that your cat is consuming enough moisture to keep the obstructions from developing. “Feeding cats a primarily canned food diet is a good prevention, because cats’ bodies are very efficient at conserving water, which means oftentimes if we're feeding them dry food, they're not drinking as much water as they need to to be healthy. Canned food mimics the diet they would have in the wild and allows them to get water from their food. This increases the amount of moisture in the urine to keep everything flowing.”

Dr. Fuller emphasizes the importance of bringing cats in to the vet regularly to help prevent life-threatening situations like urinary obstruction.

“I’m a cat owner, I get it,” Dr. Fuller said. “I have two cats and bringing them to the vet is stressful for me too. But it’s so important to get regular preventative care for them to stay on top of their health. Don’t be afraid to bring your cat to the vet. We can prescribe the cat mild sedatives or talk you through the best way to bring them in.”