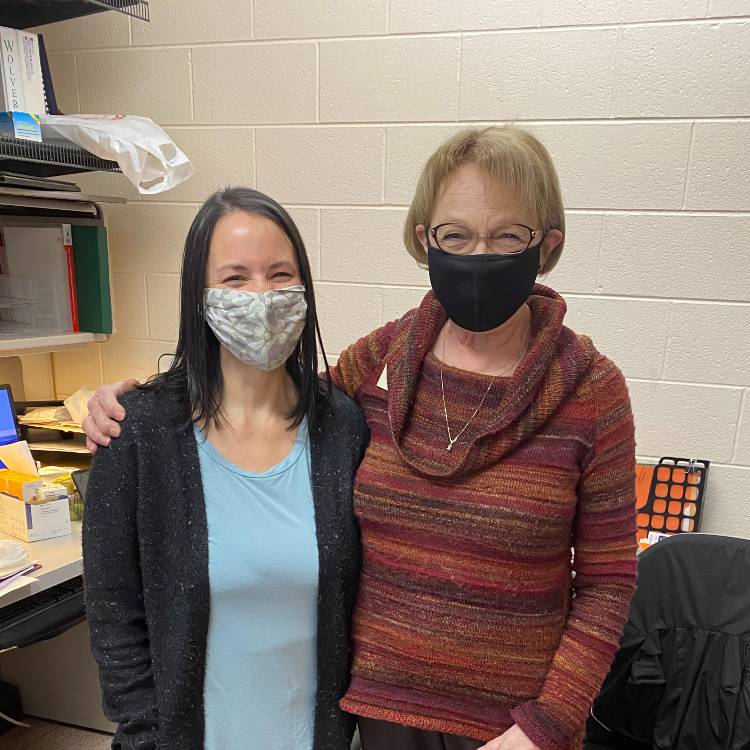 For Thelma Haynes, her career at Cascade Hospital for Animals has never been “just a job.” Thelma, who is retiring at the end of this month, credits the leadership of CHFA for entrusting her with a variety of responsibilities over the years, allowing her to flourish in her work. 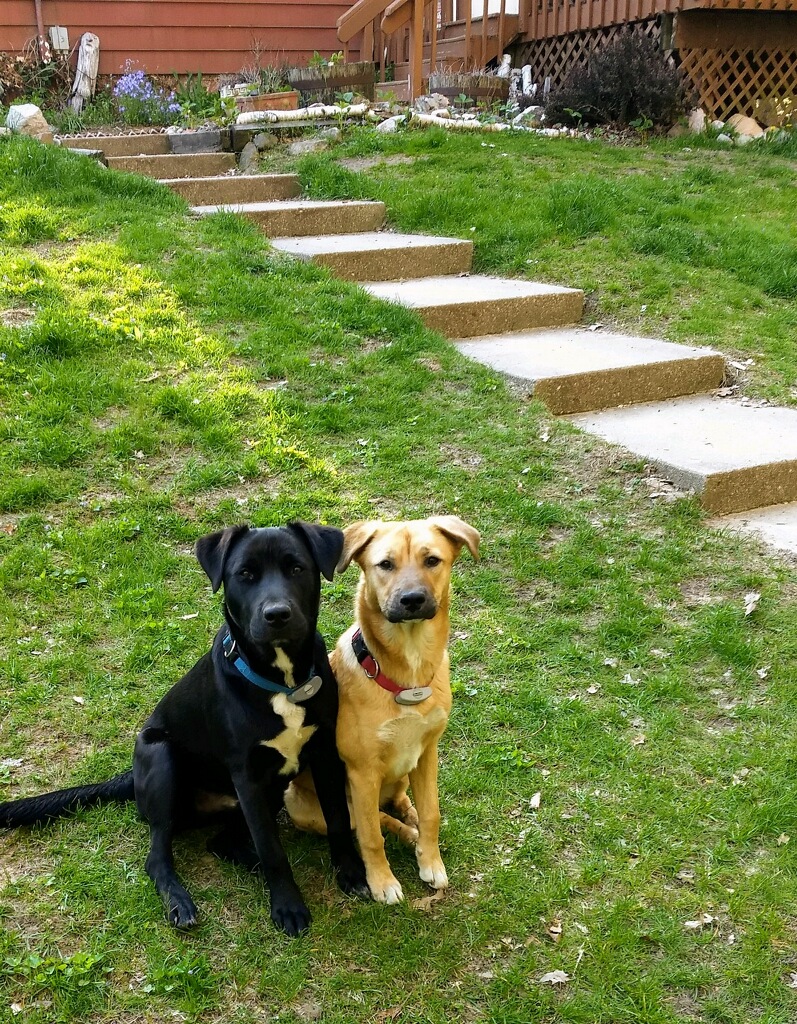 Thelma's rescue dogs, Angus and Shiloh.“Always loved what I do”
Thelma started at CHFA in 1984. “I was hired by Deb to work in the grooming department. We had just moved to the area and I was coming off of another job I loved, managing a strawberry nursery for years.”

The CHFA she first hired into didn’t look much like it does today. “When I started, Dr. Siegle’s father, I called him Doc Senior, was in his last year at the practice. They had just moved into the location we’re in today, and at the time the main entrance was what is now the cat entrance. So the building was much smaller, and the practice was much smaller. At the time there were only two veterinarians on staff!”

Thelma started out in the grooming department, but as years went by and the practice grew, her roles changed. “I’ve worked in every department except as a doctor! First the grooming department, then as an exam room technician, then with the technicians assisting in surgery. Then years and years ago, Dr. Siegle asked me to take over the inventory management of the hospital, ordering the pharmaceuticals and the surgery supplies. And I have done that for the last 30-some years.”

She added, “So there's been a lot to it. So when someone asks, ‘What did you do?’ I say, ‘A little bit of everything.’

The spice of life
Working in a veterinary practice is never dull, and that’s one of the reasons that Thelma has stayed on the job for so long. “It was always different,” she said. “It was the same, yet different. It was always challenging, and I like challenges. I like the fact we were always on the cutting edge of veterinary medicine. I liked the way we practiced medicine. I was lucky enough to work with really great doctors, and really good people, who are team players. And that says a lot.” 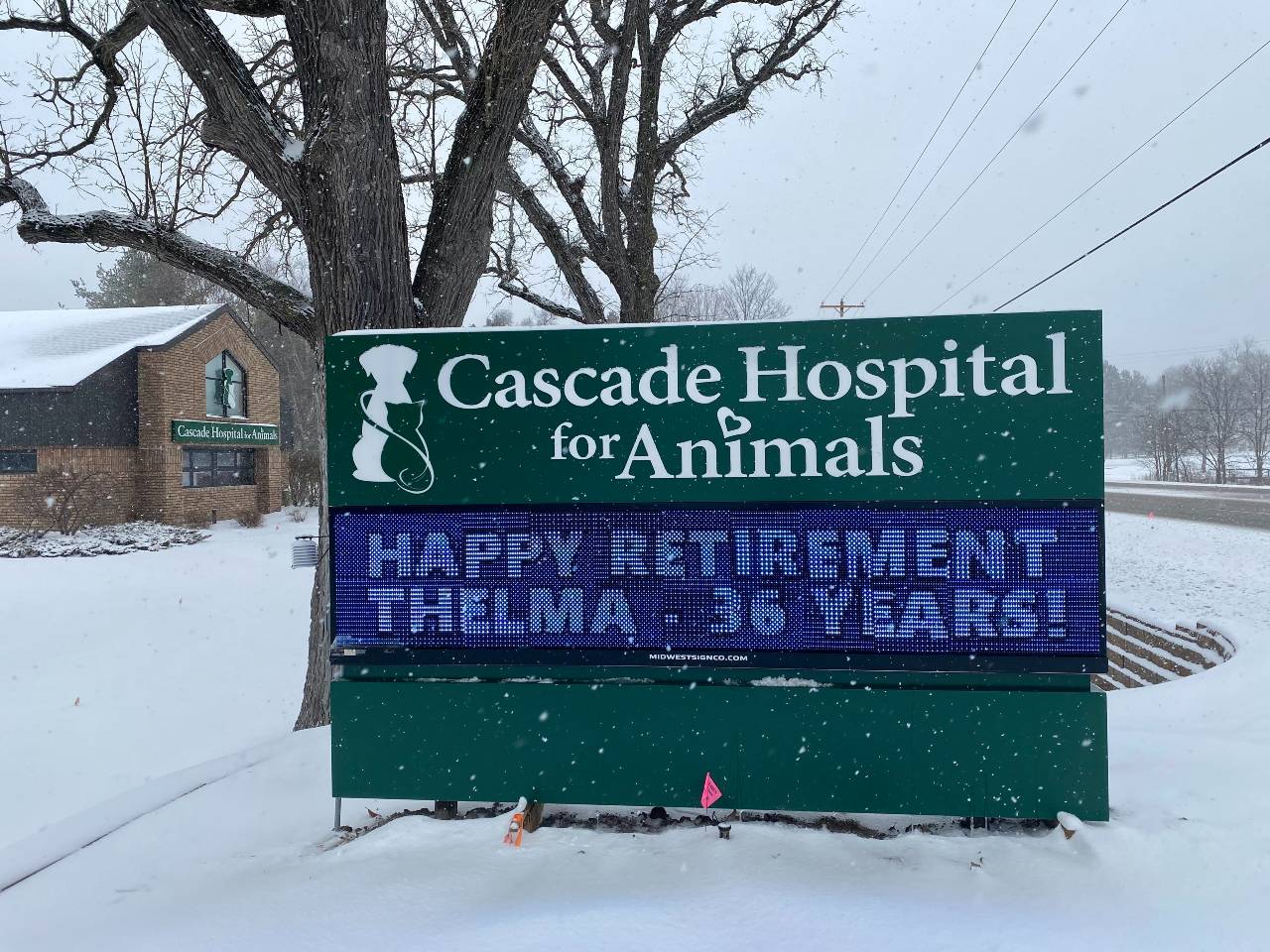 It’s not just the day-to-day of her career that Thelma has loved. It’s also the relationships she’s formed over the years with clients and staff alike.

“I love our clients,” she said. “Some clients I'm on their third and fourth generation of dogs with them. They're just sweet people. Some of them I will be friends with after I retire. We're in touch outside of here.”

Perhaps the highlight for Thelma has been working with the hospital’s leadership as the years have passed and the practice has evolved through years of additions to the Cascade location and the start of the Breton Village Animal Clinic.

“One of the nice things about Dr. Siegle is that over the years when I took on these different positions and these different challenges at work, he let me run with it. He let me take it and make it mine and do it, and had faith in my abilities, and what I did. And he respected me,” she said. “We have a mutual respect. And Dr. McBride. We'll stay friends. I'll stay in touch with them.”

After her husband Michael retired from his IT career seven years ago, Thelma wasn’t quite ready to follow suit.

“I had people ask me all the time, because they knew my husband would have liked it if I would have retired sooner. And I said, ‘You know me, I'll do it when I'm ready.’ Dr. Siegle had asked me when my husband retired, ‘Well Thelma, what are your thoughts?’ And I told him what I tell everyone, ‘I enjoy what I do, and not everybody is lucky enough in their life to have two jobs in their lives that they truly liked, and loved, and enjoyed going to, and enjoyed the people they worked with, and the clients that they work with, but I did,” she said, referring to her first job managing the strawberry nursery. “But I'm 70 now, and it's time.” 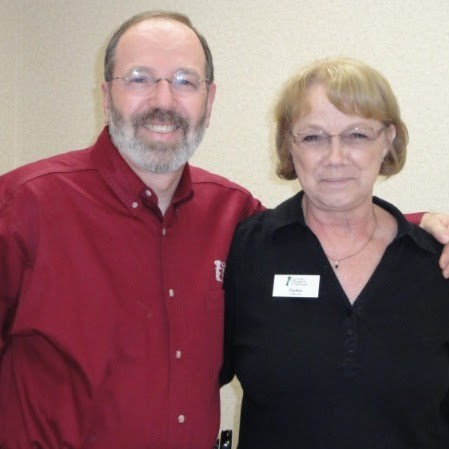 Dr. Siegle and Thelma at Thelma's 60th birthday party.Post-retirement plans
Thelma has no plans to slow down once she has retired. “I have seven grandchildren and go camping with my grandsons, just Grandma and grandsons, every summer, at North Higgins Lake. I’m looking forward to continuing that tradition,” she said.

“My home is in the middle of the woods with a half-mile-long driveway. I garden, I can take care of my rescue animals. Two parrots, two dogs, and three cats, all rescue,” she said. “I don't binge watch TV so much, as binge read. My vice is books.”

She also plans to carry on a family tradition of weaving rugs on a double-harness Union Loom inherited from her grandfather. “I never say, ‘Oh I’m so bored.’ I can’t remember the last time I was bored.”

No matter where post-retirement life takes her, Thelma will treasure her career. “I have accomplished the things I wanted to accomplish there,” she said. “I feel like I have added to that practice. I have added to the people, the staff, the clients, and I've gotten the loveliest letters and messages from the staff and doctors. And ones I've worked with in the past, and the ones I work with now, and from my drug reps, they just really touched my heart, the things they have said. And it's nice to hear. It's good to know, but I also know that I have a lot of interests, and I have a lot of hobbies and I'm not one that will sit around. And I have a lot of things that I will enjoy and am looking forward to doing.”