Have a smooth back-to-the-office transition for your pet! 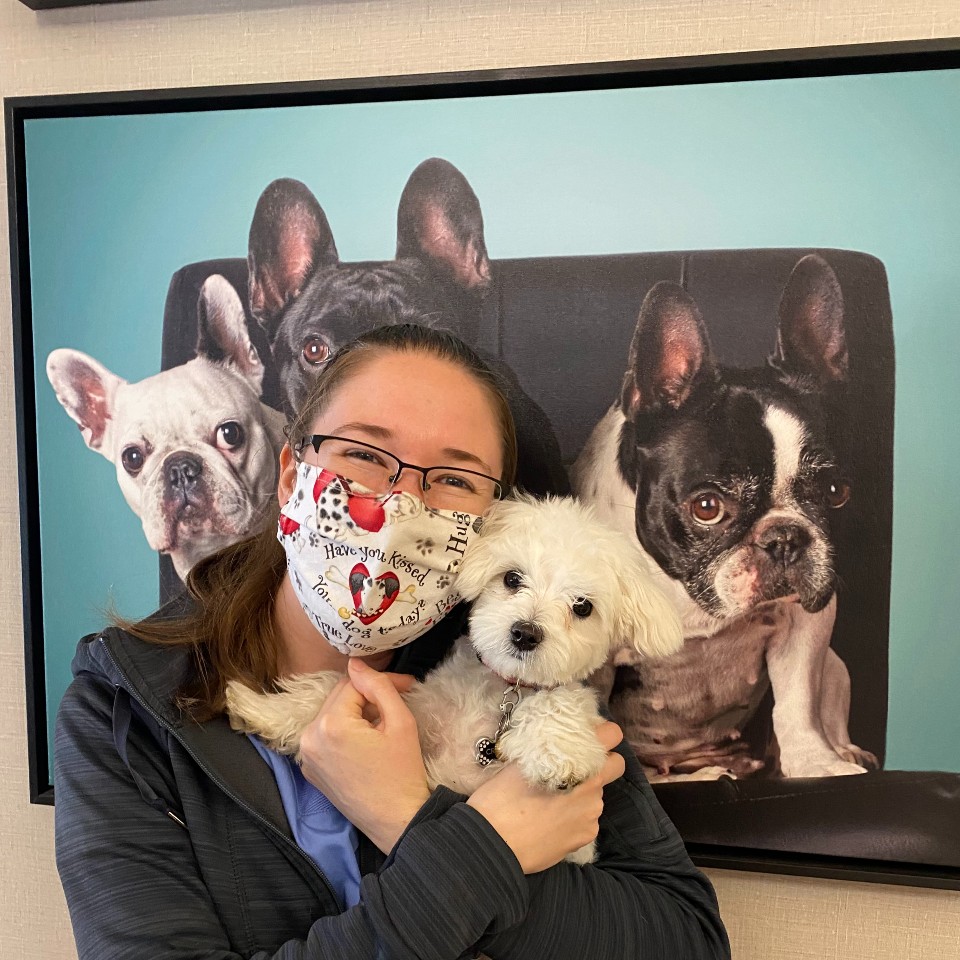 Even though the COVID-19 pandemic has followed us into 2021, there is hope that we’ll be returning to normal (or some semblance of normalcy) in the year ahead. Many employees who have been working from home will return to working from an office. What does that mean for you if you’re a dog owner whose four-legged friend has grown used to have you around during the day?

Puppy problems
Confounding the issue is the fact that many people have taken advantage of their extended at-home time to adopt a puppy for companionship. What should they do now that it’s time to go back to work and their puppies aren’t used to long periods of time alone?

According to Cascade Hospital for Animals Veterinary Nurse and puppy trainer Nikki Welch, there are many steps a dog or puppy owner can take to make the transition smoother. Preparing properly can prevent the pet from developing “separation stress” when it is time to leave the puppy or dog alone.

Starting before you even return to the office, you can prepare your puppy for time alone by slowly acclimating the puppy to the environment where they’ll eventually be spending the day.
“Practice in small increments,” Nikki said. “Even if you don't go to work right now, put them in the kennel for short periods of time, maybe going out and getting the mail or running a quick errand, and then come back. Get them used to their area that they're going to be in, whether it's a kennel or a playpen or a room, or, for adult dogs if they're comfortable with it, leaving them out in the house after making sure there’s nothing they can get in to that will cause them harm. Don’t necessarily leave a lot of food, but put long-lasting chew toys in their crates or pens to give them something to do so they don’t wind up making their own chew toys out of, say, electrical cords.”

“Ideally,” Nikki added, “you should start this type of training weeks or even months in advance in order to work them up to being ready for being left at home.” 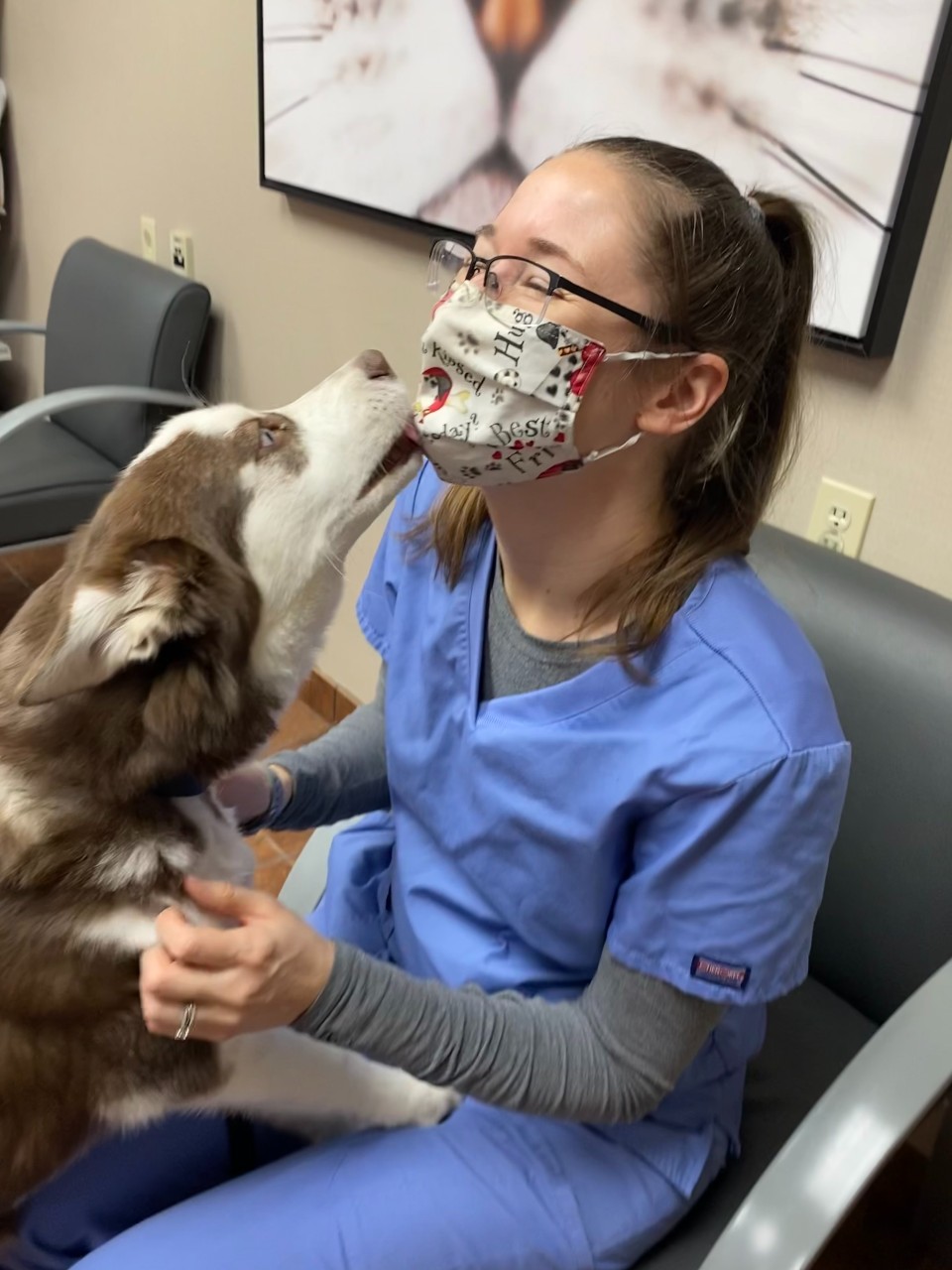 Nikki gets some love from Nitty.“They’re always learning, whether we want them to or not”
Once the back to work ritual starts, it’s important for owners to know that their puppies and even adult dogs are constantly picking up on our habits. “Keep departures and approaches as low key as possible,” said Nikki. “So that means calm entrances, even though you're really excited to see your puppy, because if we make that entrance super excitable, that becomes a time of excitement, which can turn into anxiety. And if we're really sad when we leave them or we're really excited when we come back, they pick up on that and it becomes an event.”

With their owners at home the past 10 months, puppies and dogs alike might have inadvertently picked up some unpleasant habits. “When owners put them in their crates and they bark to be let out, the owners will let them out so they can work in peace. They don’t mean to train their dogs to bark, but that’s what they’re doing,” said Nikki. Starting now to correct those habits can make the transition back to work a little easier.

Staying active with your pet makes a big difference too, said Dr. Greg Paplawsky. “Exercise is also an important part of managing separation stress,” he said. “Pets may have gotten used to being more active during the day with their people home. When the humans go back to work, pets may spend more time sleeping during the day and have extra pent up energy they need to get out. In some cases this extra energy comes out with behaviors associated with separation stress.”

Stress vs. Anxiety
Separation stress can lead to more difficult to treat separation anxiety if not caught in time.

“With true anxiety, there are hormones and cortisol and all of those stress responses that they can't control. And it's this true phobia anxiety as opposed to milder stress in which they whine in their kennel. They're trying to escape exits, windows, doors. You'll see destruction around door frames and window sills. That would be true separation anxiety, and sometimes that develops over time out of stress from when you go from being home all the time to leaving your pet.”

In the case of separation anxiety, the sooner the owner gets the pet help, the better.
“If they notice it and two weeks later, they reach out, we have a small hole to dig out of, but if it's been going on for months—say they've been back to work for six months and now the dog is to the point where it's hurting itself—that's a pretty big hole to dig out of and probably needs medication. So a lot of people think, ‘Oh, it will resolve itself.’ But if it's stress or anxiety related, it's not going to. So getting a team on board is super helpful,” said Nikki.

Dr. Paplawsky agreed with Nikki, and added that putting your dog on medication to help them shouldn’t cause you concern. “If your pet does end up needing medication to help manage separation stress and anxiety, we have a lot of different options, and just because we may start your pet on medication, it doesn't have to be life long,” he said.