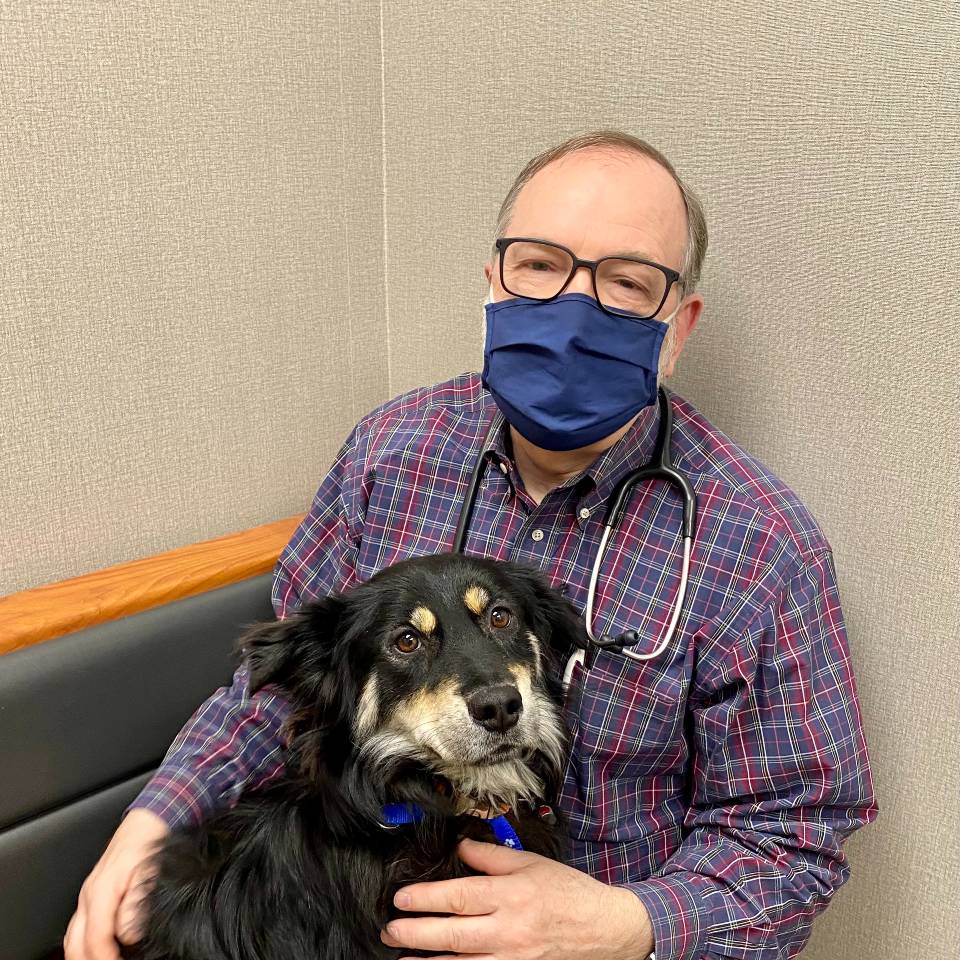 New Cascade Hospital for Animals client Anne was preparing to turn into the clinic’s parking lot last Thursday for her dog’s first appointment at the clinic, when a vehicle said to be travelling at a high speed smashed into her car from behind. In the chaos of the moments following the wreck, Anne and her beloved rescue dog, Sadie, a mix of Chow, Akita, Malamute, and more, sat terrified among open airbags and broken glass. 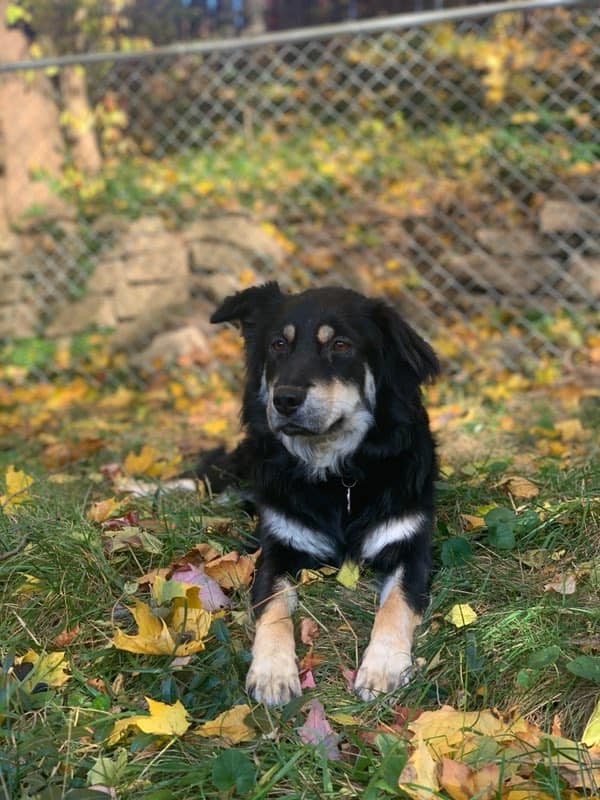 Sadie before her adventure At first, Sadie, who was in the front seat, whined and cried beside her beloved owner. Overstimulated by the sights and sounds of the experience, Sadie was looking for a way to escape to safety and found it in the broken back hatch window of the car. In an instant, she darted across the folded-down back seats and through the window. Before Anne could grasp what was happening, Sadie ran across the busy Cascade Road and, with cars screeching to a stop to avoid her, she disappeared from sight.

“It was instinctual,” said Anne. “She was just looking for safety in a scary situation. So she was being smart! But at the time it was terrifying. People around me were getting out of their cars to see what was going on, and all I could say was, ‘Get my dog! Get my dog!’ But no one could catch her in time.”

Anne was seriously injured and eventually placed in an ambulance and sent to the hospital. “I was looking out the window of the ambulance and I saw a bunch of employees of Cascade Hospital for Animals standing outside, talking about ways they could help track Sadie down,” said Anne.

Because Anne was injured and focused on her own recovery, it fell to her two daughters to pick up the search for Sadie. Sarah, at home caring for her two-month-old baby, set out on a social media campaign to get the word out. “She’s got a background in marketing,” said Anne, “so she knew where to start.”

CHFA also posted about Sadie’s situation on our Facebook page, launching a thread that was eventually 142 comments long with 622 shares from the CHFA/BVAC community. Throughout Thursday and Friday, people commented about possible sightings of Sadie and places she might be found, along with helpful tips for tracking down a scared lost dog.

Sarah monitored the social media posts diligently, while her sister Haley was “the boots on the ground.” “My girls would call each other,” said Anne. “Haley was out there looking, and Sarah would call and 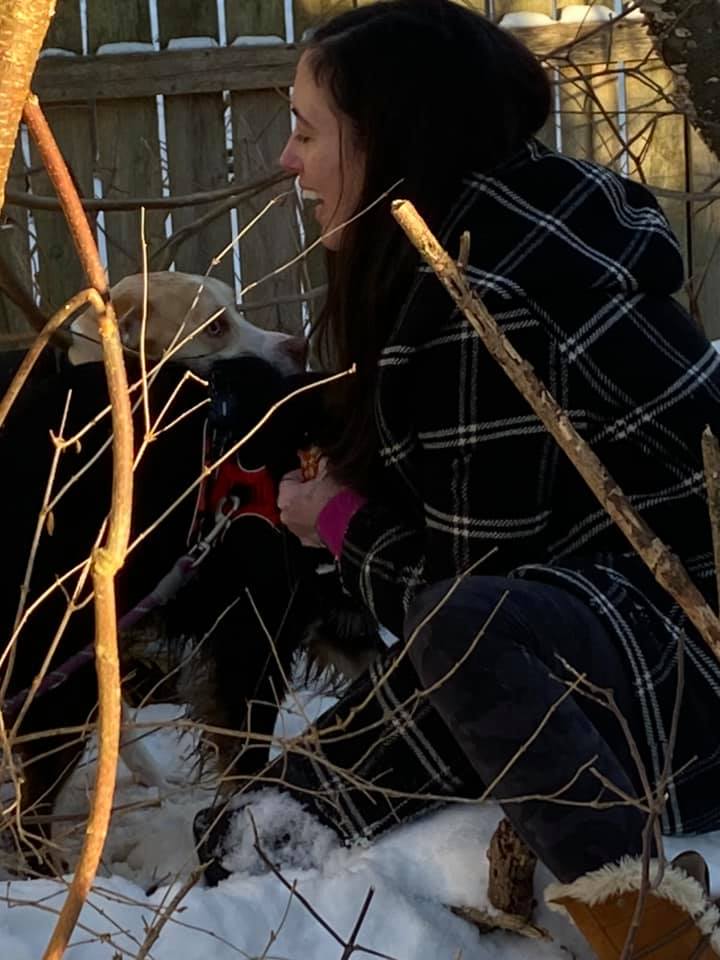 Haley and Comet were thrilled to see Sadie at last say, ‘Okay, I’ve got a clue. Go to this corner or that corner, go here or go there,’ based on tips from social media.”

Someone on social media suggested that searchers bring another dog with them, as “the dog will be the one to bring her home.” So Haley brought her own dog, Comet, with her as she searched.

“Comet and Sadie are good buddies,” said Anne. “And it was true, when Haley finally tracked Sadie down on Friday, she said, ‘Hi Sadie, hi Sadie,’ without getting much reaction. But when she held up Comet, that was when Sadie started wagging her tail, as though she were saying, ‘Oh, there’s my buddy. Okay, I’ll go home.’”

In spite of some reports on social media of Sadie spottings as far north as Plainfield Avenue, she was found less than a mile from the site of the accident, thanks to the overwhelming efforts of the social media community that took up her cause. In the midst of all the chaos, and coping with her own injuries in the aftermath of the accident, Anne and her family were touched to receive flowers from Cascade Hospital for Animals on Friday evening. “The note said they were so sorry, that they were looking for Sadie and doing whatever they could for her.”

The family was also surprised and delighted, when, after Sadie’s return was officially announced, they received a phone call from Dr. Siegle, during which he offered to stop by their home and examine Sadie. “I hadn’t even met him yet,” said Anne. “I was on my way to my first appointment at this clinic when the accident happened, and I was amazed that he would offer to do that.” 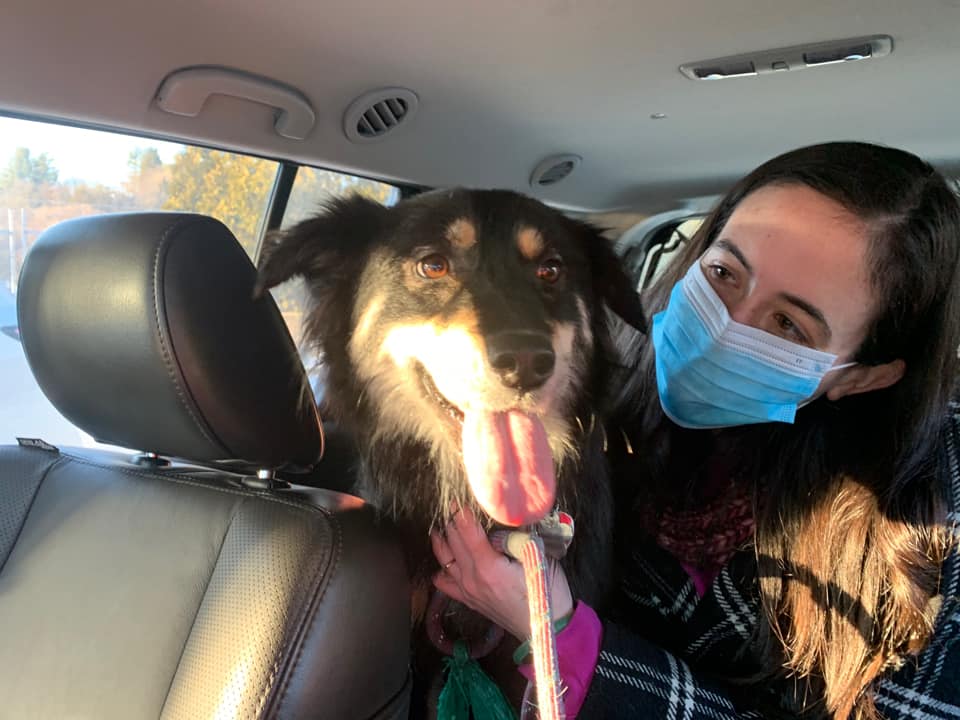 Haley and Sadie ride home together after Sadie has been foundThankfully, Sadie seemed okay after a bath, so Anne’s family decided to wait until the following day to have her seen. “The following morning Dr. Siegle called us and said, ‘Listen, I see where you live and it’s actually much closer to our Breton Village office. Please come to that one so you don’t have to drive as far.’ And so my husband took him to Breton Village and Dr. Siegle took lots of time examining Sadie and making sure she was all right. I saw a picture of Dr. Siegle with her and she just looked so relaxed with him.”

Although Sadie was adopted in May of last year, Anne’s family had been taking her to a vet near their summer home in the Ludington area. When they moved back to the Grand Rapids area to be near their daughters, “We knew we needed a local vet and chose CHFA,” said Anne. “And I’m so glad. I’m just so thrilled with all they’ve done for us so far.”