Rescuing Rocky: How a quick-thinking team saved a dog from bloat 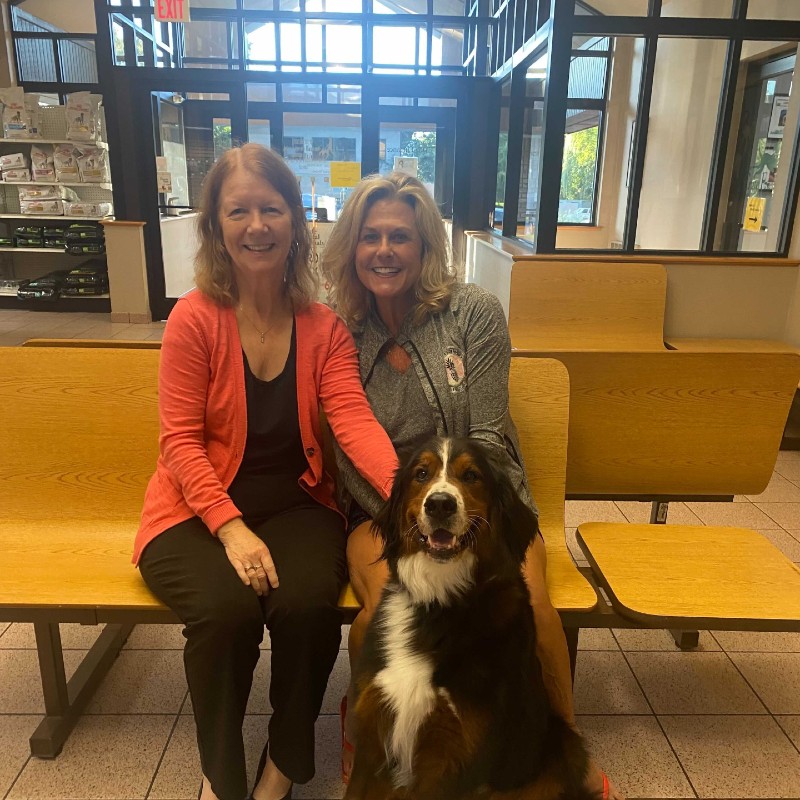 For CHFA client Mary Anne, when a sudden emergency threatened the life of her five-and-a-half-year-old Bernedoodle Rocky, it was all a matter of good timing and making the right call. 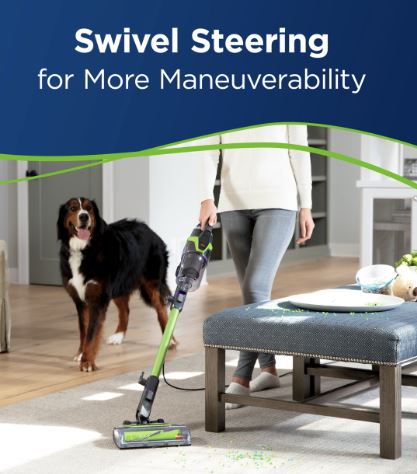 Model Rocky in a Bissell ad, courtesy of BissellRocky, who’s been a member of Mary Anne’s family since he was eight weeks old, “has a wonderful temperament, he’s a very bright dog,” according to Mary Anne. Although he’s a mixed breed, it’s hard to tell at a glance that he isn’t a purebred Bernese Mountain Dog. With his gentle personality and good looks, Rocky is literally model material: he has appeared in ad campaigns for Bissell’s pet-inspired cleaning products.

One evening in August, it suddenly became clear to Mary Anne that something was wrong with Rocky. “He’s a member of the family and I can read him pretty well,” she said. “It had been a typical day, my kids had come and gone. Out of nowhere, he started running around the living room like he had to throw up. I let him outside and he continued to run around like I’d never seen him do; it seemed like he was both trying to poop and trying to throw up. I was baffled; I had no idea what was going on.”

Rocky’s behavior continued to worry Mary Anne. “We came back inside and I tried to get him settled,” she said. “I’d sit with him and he’d be okay for a few minutes, and then up he’d go and around he’d go. His behavior was so out of the ordinary that I called my daughter and said, ‘Rocky's not doing good.’” Mary Anne’s daughter, Claire, offered to come over and spend the night at Mary Anne’s house to help keep an eye on Rocky. But by the time Claire arrived, Rocky was lying on his bed in Mary Anne’s bedroom, unable to get up.

“His eyes started rolling and I was frantic,” said Mary Anne. “So when Claire got here, we loaded him immediately in her Jeep.” By this time it was 9:00 at night, and Mary Anne’s options were emergency veterinarians. Claire called 28-year CHFA employee Kathy Tomczak, a family friend, for guidance.

“Mary Anne was in the backseat of her car with Rocky’s head in her lap,” said Kathy. “When she called, she said he was super lethargic and that the whole situation had progressed so quickly, so my first thought was that he might have eaten something he shouldn’t have.” Kathy called Animal Emergency Hospital, explained the situation to them, and told them Mary Anne and Claire were on their way with Rocky. “And that was a good thing because at this point he was dying,” said Mary Anne. “I was in the backseat with him just trying to keep him awake.” 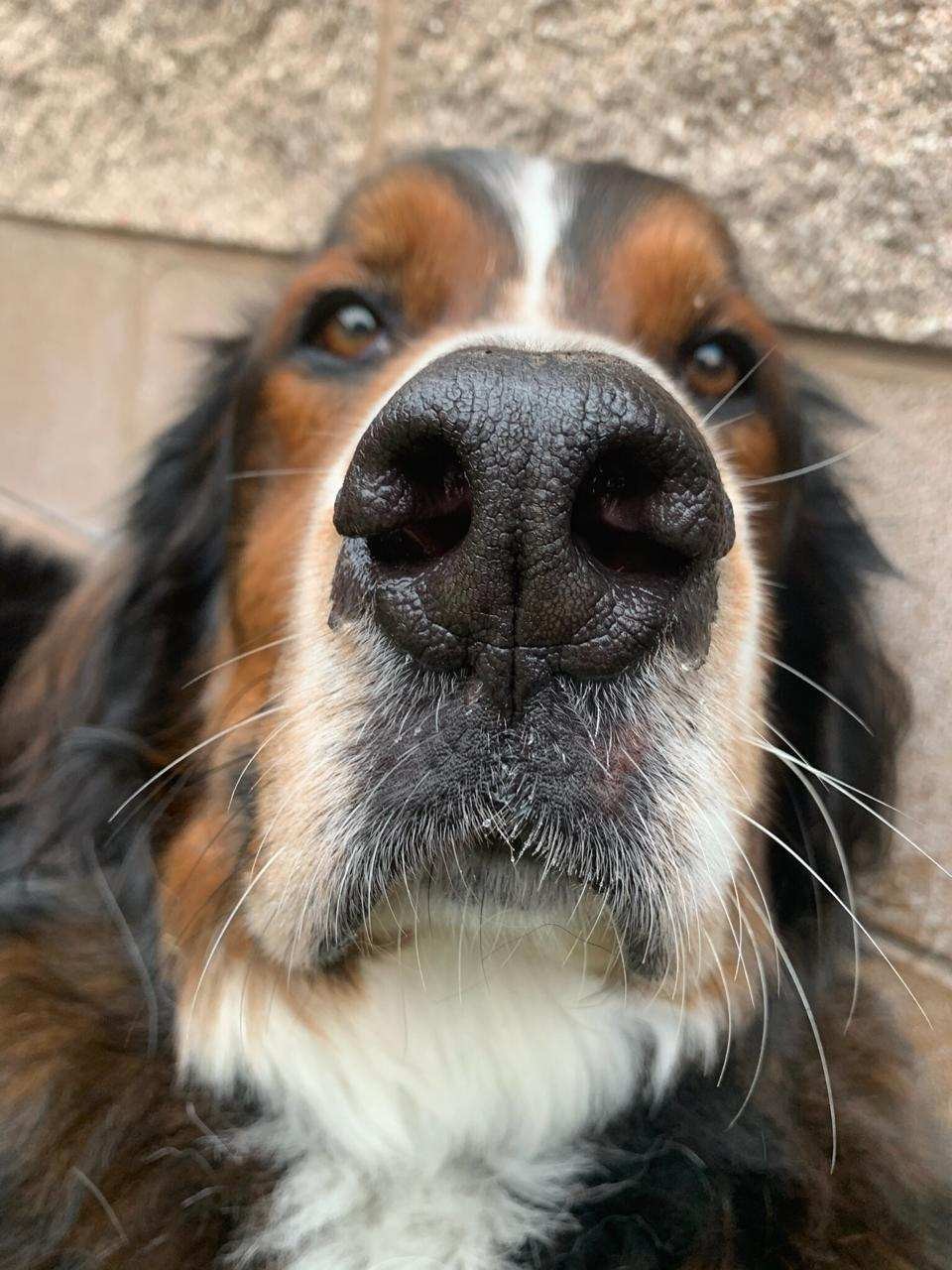 When Mary Anne and Claire arrived at AEH, the team was ready for them. “When I called, they were super calm and professional,” said Kathy. “I told them Rocky was in a desperate situation and that there was no time to lose.” The team brought out a stretcher, loaded Rocky on the stretcher, and rushed him inside. “At this point we still had no idea,” said Mary Anne. “But the vet came right out and said, ‘We think it's this condition called bloat. We'll know once we do an x-ray.’ They did the x-ray and sure enough, it was bloat.”

Bloat is a condition more common in larger breed dogs, such as Great Danes, in which the dog’s stomach stretches to many times its normal size, causing compression of the circulation. If not caught in time, bloat can cause a quick and painful death. At around 85 lbs., Rocky is not in the high-risk category for bloat, but his experience is evidence it can happen to any larger dog.

“I hadn’t really heard of bloat before but it made his behavior earlier in the evening make more sense: He was in terrible pain,” said Mary Anne. “Another thing I had noticed that evening was that one side of his belly was enlarged, but not knowing about bloat, I wasn’t able to make the connection. I read about it and learned it’s possible it could be caused by stress, which he was being treated for recently, but the truth is, no one really knows what caused it for Rocky, including the vets.” 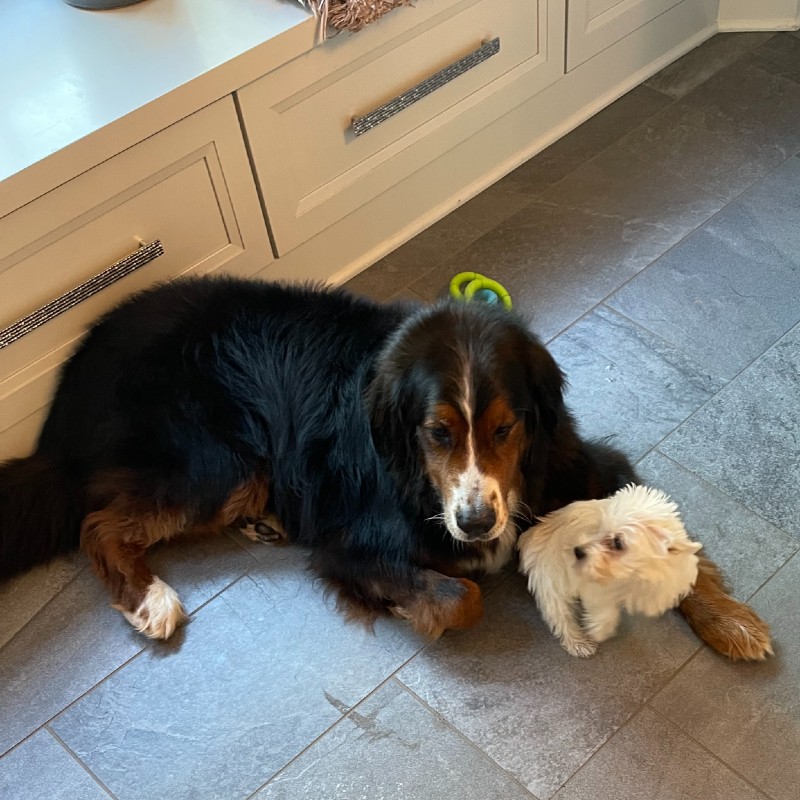 That night at AEH, Rocky underwent a procedure called a gastropexy, in which his stomach was tacked to his body wall, dramatically reducing his stomach’s tendency to bloat. “Fortunately, we caught it soon enough, so his stomach was still alive. The vet told us that if they get in there and they find that the pet has lost blood to their stomach, they probably can't be saved. I guess that's why it was such a critical, emergent situation. The vet explained to me that these cases of bloat come on so quickly and so often the animal dies because you can’t get to them soon enough.”

After Rocky returned home, he rested for ten days under Mary Anne’s watchful care. “They put him on two high potency painkillers to keep the pain at bay because he was sewn inside and outside,” she said. “After that, I took him in to Cascade and they took the sutures out for me and he looked fine, and he's really pretty well back to normal, really.”

With Rocky back to his old self, Mary Anne hopes other dogs who are struck suddenly by bloat have the same outcome he did. “The more people I've talked to, they say, ‘Oh yeah, we had a dog die of that,’ or, ‘Oh yeah, I knew somebody.’ It's amazing how many people know about it. I was shocked.”

For Rocky, luck was part of the solution, but Mary Anne believes having great people on his side was the key. “There was a team effort. It was myself and my daughter and Kathy and the team at Animal Emergency.”