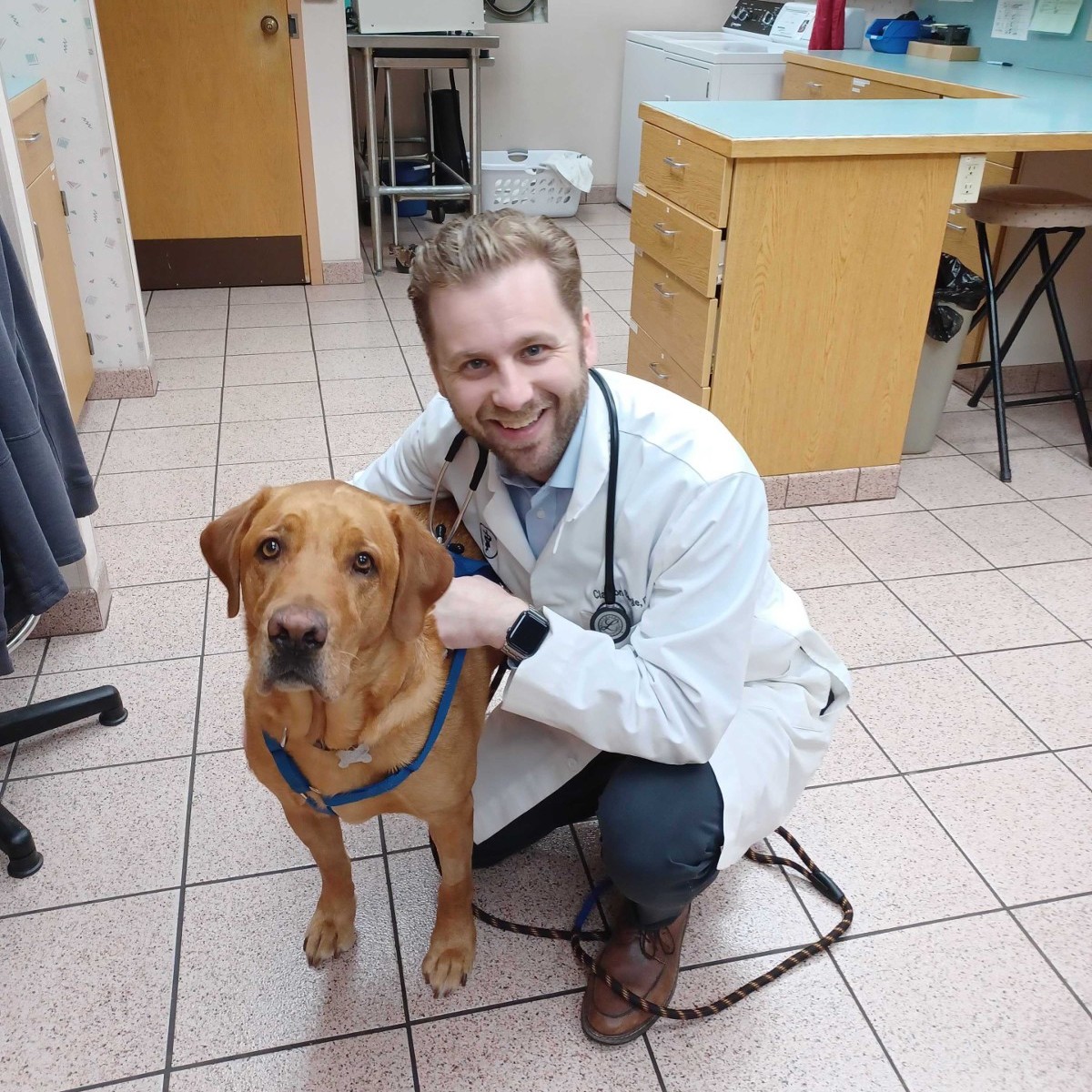 When your pet suffers an injury that affects daily functioning, surgery is an important option to consider. Your veterinarian will weigh the advantages and disadvantages of different types of surgeries to treat the injury and work with you to determine the best treatment for your pet. 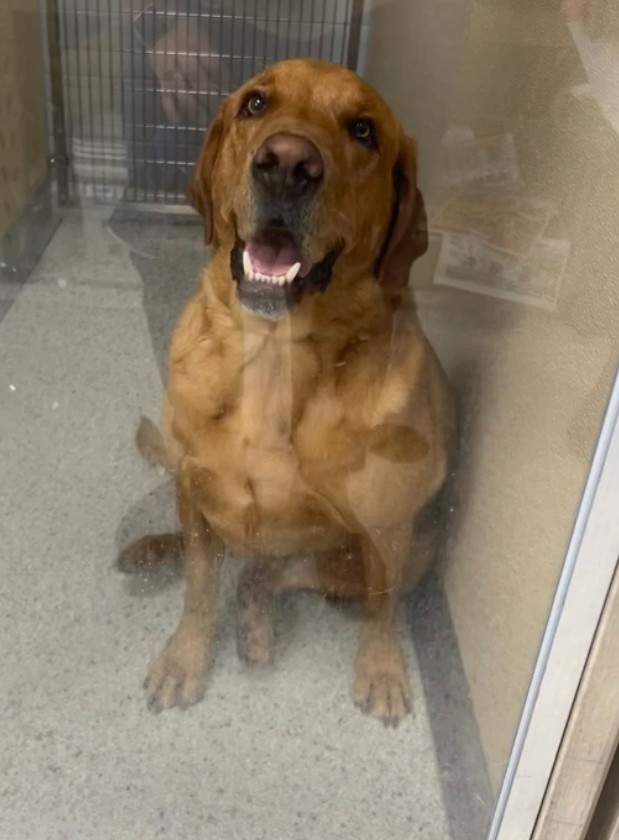 Morgan recovering from TPLO surgery.One common injury with dogs is to the cranial cruciate ligament (CrCL) in their knees. This ligament is essentially to a dog what the ACL is to a human. According to Dr. Clayton Siegle, the CrCL tends to be more prone to tearing due to injury, breaking, down or weakening than other ligaments in the knee.

For years, CHFA has performed a procedure called a lateral suture technique, which creates a kind of replacement CrCL. “We take a large nylon suture and place it in the general direction of where the CrCL ligament normally runs,” said Dr. Siegle. “It’s outside of the knee joint itself, and over time, the body develops scar tissue that acts as the ultimate stabilizing agent for that knee.” This is still a viable option for surgery, but depending on a variety of factors, may not be the best option. 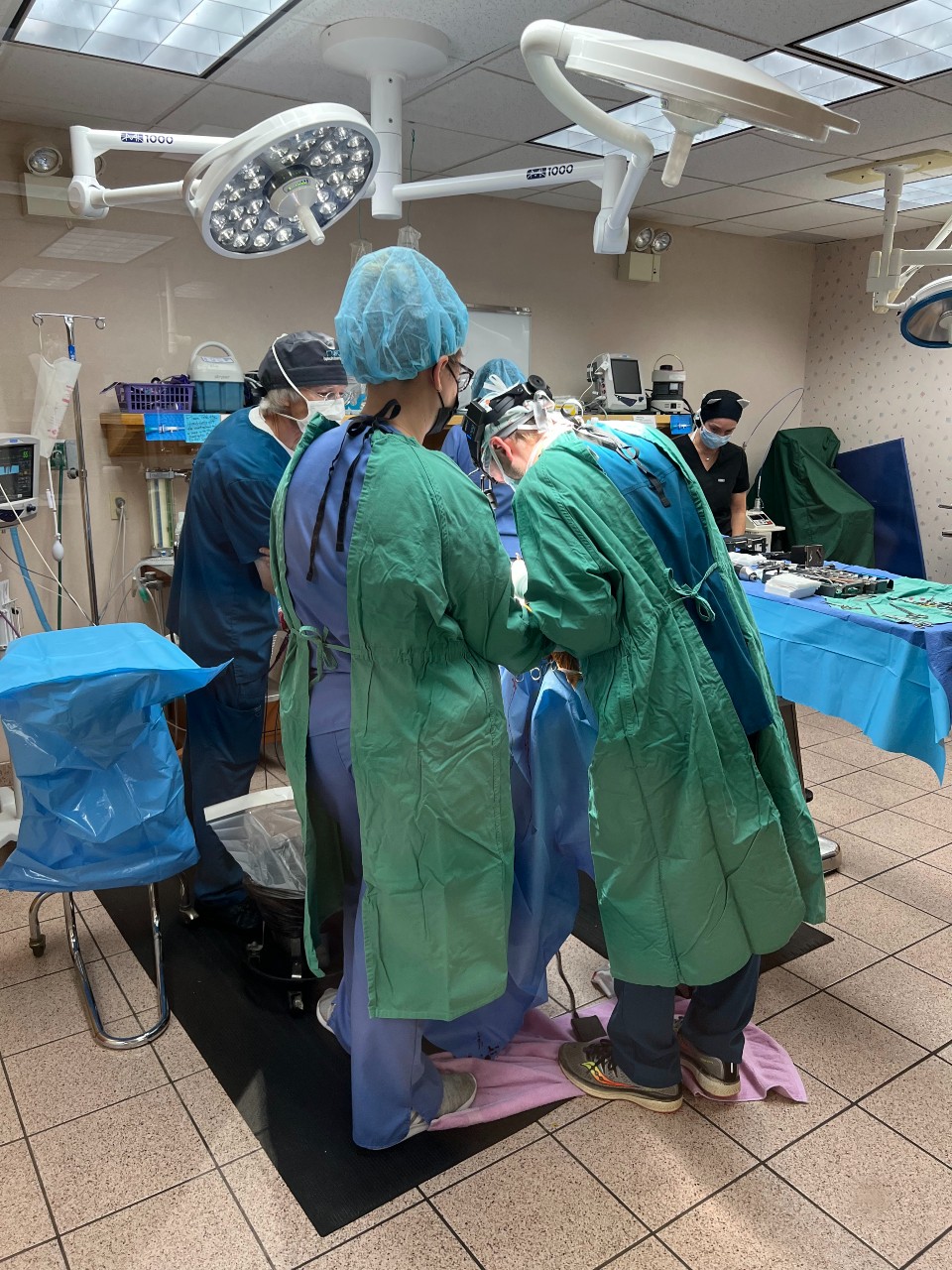 This summer, CHFA began offering a different technique to treat CrCL injuries called a tibial plateau leveling osteotomy, or TPLO. “I performed TPLOs as a surgery intern,” said Dr. Siegle, “but they are more commonly performed by board-certified specialists. Historically, there haven’t been as many general practitioners offering these types of surgeries so CHFA would refer patients to specialists when a TPLO surgery was the best option.” As part of his continuing education, Dr. Siegle attended a course at Colorado State University in July before he began performing the surgery for CHFA.

“Offering this type of surgery here makes it more accessible for everyone, since specialists tend to be a more costly option,” he added.

To explain how TPLO surgery works, Dr. Siegle likens the dog’s leg to “a ball tied to a rope on a hill. The top part of a dog’s tibia, or shin bone, is slanted like a hill, and the bottom part of the femur, thigh bone, is rounded like a ball. The CrCL ligament is the rope that keeps the ball on the hill. When everything’s working appropriately, the ‘ball’ stays in place, but as soon as the rope starts to fray or completely tears, it starts to slide down the hill. So every time the dog takes a step, the femur wants to slide back on the tibia. This instability creates a lot of discomfort.”

Whereas the lateral suture technique replaces the “rope,” TPLO surgery changes the biomechanics of the dog’s leg. “Basically just we're taking that ‘ball’ and putting it on flat ground by shifting the angle of the tibial plateau so it is flat. This changes the forces on the knee and allows other ligaments to help stabilize the knee. So every time the dog takes a step, functionally, the knee is stable.”

Both the lateral suture technique and TPLO are good solutions for dogs with CrCL tears, but for some situations, one is better than the other. “For smaller dogs, it may be a little bit easier to use the lateral suture technique because there isn’t as much bone to work with, and they tend to be a little less active so the TPLO might not be the best option for them,” said Dr. Siegle. “For bigger dogs and more active dogs, we’ve found that the TPLO surgery is a better treatment for long-term functionality, and getting them back to their active selves.” It’s also a better solution in cases where there is a partial tear rather than a complete tear. "Ultimately, I recommend discussing with a veterinarian what is the best option if your pet has a CrCL tear."

Round two for Morgan 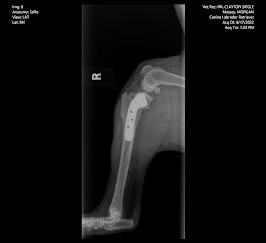 One of the first TPLO surgeries Dr. Siegle performed at CHFA was for Morgan, a very active four-year-old yellow labrador. “He is always jumping up and running around, chasing balls and frisbees and trying to catch snow out of the snow blower,” said his owner, Joyce. “He’s a great dog who listens well, but he has a lot of energy.” So while it wasn’t clear what the exact cause of his injury was, it wasn’t a surprise when started showing signs of being in pain. It was not the first time his over-exuberance caused him injury, either.

“Morgan tore his left side in 2020 and we performed the lateral suture technique on him at the time,” said Dr. Siegle. “This time he had a partial tear on his right knee, so as he recovers from this surgery, it will be interesting to compare how he recovered from each.” One of the advantages of TPLO is that the recovery time is a little quicker: three to four months to full recovery versus up to six months for the lateral suture technique. It was that information that sold Joyce on going with TPLO surgery the second time around, combined with the fact that the tear wasn’t as complete. “It’s hard to ask Morgan to stay still for too long, so we need him to heal.”

Morgan’s TPLO surgery was a success, and his recovery is going smoothly so far, though Dr. Siegle will continue to monitor his progress to ensure his bone is healing well. The goal for everyone involved, from his family to his veterinary team, is for him to be able to resume being a four-year-old lab. “He’s still got a lot of energy,” said Dr. Siegle. “He wants to play, jump, and run, and if we can maintain the full functionality of the knee, he can continue to be that rambunctious, energetic lab who doesn’t feel sore after playing.”

For Joyce, Morgan’s TPLO experience has gone as well as she could have hoped. “I’m very pleased with Cascade. They really care about the animals and treat them like their own,” she said.